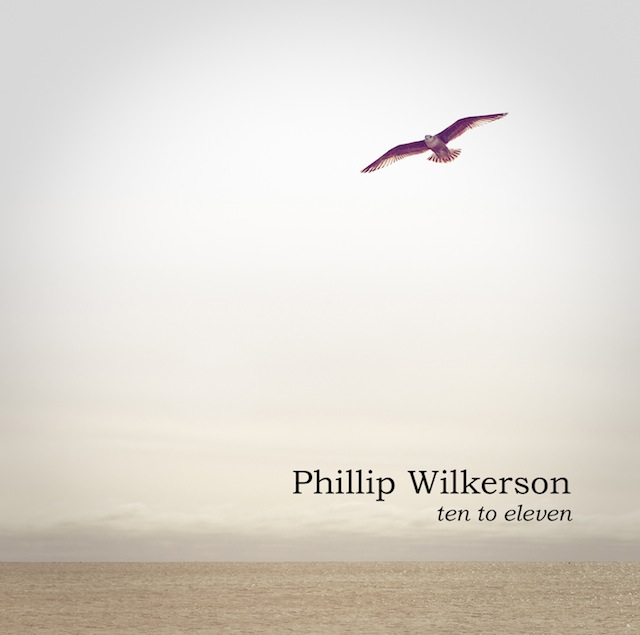 Phillip Wilkerson is a master in the field of ambient electronic music. His attention to detail and fondness for both interesting sounds and engaging melodies opens up his potential audience to folks who wouldn't probably listening to anything marked "ambient".

What he creates are wonderful soundscapes... aural pictures that become the soundtrack to the listeners life. It is, in fact, surprising that Wilkerson hasn't scored a soundtrack because his style would be fitting in something character-driven and low-key.

"ten to eleven" is his latest album and I was grateful to be given a preview copy to listen to. My initial impression was very positive... it truly is a thing of grace and beauty... and this thought has only coalesced with repeated listening.

The album opens with "all possible worlds"... a relaxed exploration into electronic sound... light drones underpin some warm synths to create an exquisite and immersive wall-of-sound.

Next up is "Saturday" which is, for me, one of the stand out tracks... in it Wilkerson applies a synth that, in one hand sounds dated and in the other sounds wonderfully fresh and new... to create a track that is hugely reminiscent of Vangelis' "love theme" from his awesome soundtrack to Bladerunner.

There is something wonderfully sensual about the way the synth is played... seductively like the atypical 'sexy saxophone'... to create a wondrously alive mood. It truly is a work of beauty.

Wilkerson then takes us into a more traditional ambient space with the immersive "complex silence 15". Strong chords are played over various stratosphere of drones to create an open sound... a sound that speaks of space, distance and a pleasant lusciousness...  a coolness underfoot, so to speak.

We then come to "the heart has reasons" which holds a more melancholic air... an air reminiscent of Angelo Badalamenti's seminal soundtrack from "Twin Peaks". The track ebbs and flows with an almost  overwhelming sense of despondency... there is something... subtle at first that starts to build... a faint glimmer of hope... an aural ray of light that warms and inspires the listener to hold on... to wait for the day to break and it does... by 4 mins in, the piece transcends the melancholy and finds it's joy... and its a wonder to witness.

Track 5 is entitled "blue by velvet" and is another, more traditional, ambient piece characterised by a wall-of-sound underpinned by immersive drones with a melody that plays on the ebb and flow with great effect.

"The name within my heart" is another track that reminds me of Vangelis' work for the film Bladerunner... with a haunting melody over a strong bedrock of synths. It is in this track that the potential for Wilkerson to score a film becomes apparent... it is truly a beautiful and sensual track the encapsulates the stillness of the wee small hours of the morning.

We then come to the penultimate track on the album... "the way home"... which presents another melancholic soundscape for the listener to delight in... a further extension into the exploration of stillness in the early hours. There is a relaxing and  meditative quality about this track... a sense of the unhurried, deliberate and intentional. Nothing overplayed... nothing overly demanding... just some superior synth work and a space to ponder. My kind of ambient.

Lastly we have "an ending (is a beginning)" which opens with a rapture of bright and open drones... that builds like an explosion of joyous supernova before contracting and dying almost as quickly as it came. A beautiful ending to a beautiful album... one that I will come back to for many years to come.

Available on bandcamp for $8.95

Posted by weareallghosts at 7:24 pm

Supurb review - Nice to find music where the '10 to 11' doesn't reference the volume on the amps. These tracks leave you room to think, no push, drama from a distance so you can enjoy the trip. Phillip carries us out for a nice moment in the sun, around the farm, watching the leaves change, just a beautiful trip through time. Love off the clock from '10 to 11' AW

Thanks for your comment Alan... its a belter of a release to be sure!