A bowling ball engraved with "Homer"

Did you see the episode of the Simpsons where HOMER buys a bowling ball for MARGE with HOMER engraved on it..? 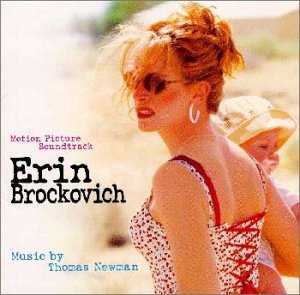 Well... I bought the Erin Brockovich soundtrack for Olly :: Thomas Newman is the main conductor/ composer of the OST and Olly loves his track - Whisper of a thrill from the Green Mile OST. It was £2 from HMV and... well... I LOVE IT!!!

Its stocked high with short tracks :: ideas :: beautifully organic, almost bluesy, piano-orientated soundscapes. Fab. Reminds me, in part, of the Regarding Henry OST but not as jazzy. It comes in at just over 35mins...and that's with 2 Sheryl Crow tracks...

The two Sheryl Crow tracks are well fab too :: Redemption Day is amazing with a sweet country bounce and thought provoking lyrics... "...was there no oil to excavate? and... let's face it Everday is a winding road is a classic!

I love the fact that I haven't seen the film and I am listening to this piece of music out of context. I am creating the context... filling the void with my memories... my associations... my ideas...

That's one of the reasons why I listen to soundtracks to films I haven't seen :: to make up my own context... Sure I listen to OSTs to remind me of films I have seen but they can take wings and fly... Take BLADERUNNER for example :: one of my fav films... with an OST thats in my top ten most fav albums EVER! It has become more to me than the memories it brings of the film... it is more :: beautiful and significant times with Olly come to mind.

So, yes, this was a bowling ball with Homer's name on it... but I did genuinely hope Olly would love it. She will... especially when I buy her some chocolate tomorrow ^____^