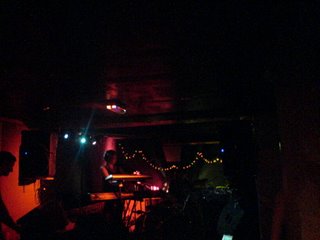 Went through to my folks last night... We need a break...

Thanks to my folks, we got a chance to go out... Get a bit of 1-on-1 time... We have tickets for the Odeon and hoped to see the new Harrison Ford film. Unfortunately (or fortunately, if you have read the reviews...) it wasn't on... so we headed to FAVORIT off Lothian Road for a tea. I have to be honest - the one off Lothian Road isn't as good as the one at Bristo Square... but there are very few cool coffee houses open late in Edinburgh in this part of town.

Anyway, I remembered that the BOOGALOO BOTHY was on - so we went to check it out. According to the e-flyer ::

Boogaloo Bothy is all about getting into the best new music produced right here, where we're from. It's about music that is creative, from the edge, and will get us dancing. It's about creating a vibe that feels like home... watch it unfold...

Another honest moment :: I felt guilty being out in Edinburgh AND at the Bothy without the Soos... but I wanted some 1-on-1 time with Olly. Hope you don't mind, bro?

Sometime after 2300hrs...the Joe Acheson Quartet (pictured top) came on (although they were a trio) and they were top dollar! Live electronic goodness with a drummer who was obviously trying to get hired because he was amazing - it was like hearing live drum samples of the kind favoured by Amon Tobin. 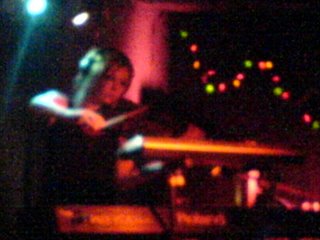 The lassie playing the keyboard/ violin was switched-on too. I couldn't see the chap doing the samples and playing bass but the overall sound was magical. Like Fourtet mashed with Broadcast.

We also saw Paul T aka DJ Haggis - he was in his element.

Maybe wasn't the best place for a romantic night out - I like to talk to my wife, not SHOUT AT HER!!! - but it was great to see the Quartet. Next time, honey, we'll find Beanscene and talk... but thanks for your company ^____^

Check out the review for Boogaloo Two :: Link