My thoughts on "the stars and afterward" by Philip Wilkerson 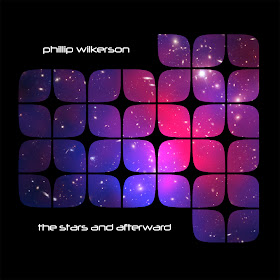 I have been a fan of Philip Wilkerson's music for a wee while now. I think he is a talented individual with whom I share a passion for electronic soundscapes. I considered "ten to eleven" to be one of my top ten favourite albums of 2011 and jumped at the chance to listen to and promote his latest release... "the stars and afterward".

I am delighted to say the album sounds awesome... there is a vibrancy about the music that is simply delightful.

Wilkerson's music varies from more upbeat Vangelisian melodies to more subdued ambient soundscapes. I love this variety and it is in full effect on this recording.

The opening track - "Monoceros" - is a ray of sunshine... wonderfully upbeat with some retro Vangelisian synths used to carry a rather chirpy melody.

From this opening we move to a more subdued but wonderfully deep track entitled "among the nebulae" which has a tremendous fluidity about it... the rhythms used bring a real sense of movement... one that is inherently catchy.

The third track - "Radiance" - is a remastered longform slice of the most delightful ambience. It is an immersive somascape that just fills me with joy. It is truly radiant. A vision of light and inspiration that certainly doesn't feel like 21 minutes in duration.

"Endlessly spiralling" - the fourth of the seven tracks - is sequenced just right... it follows perfectly on from "Radiance" and continues the theme of light... in the most uplifting of ways. It is gorgeous, plain and simple. Warm, immersive and inviting.

Coming in fifth on the tracklisting is "seven degrees north of Castor" which brings the listener back to the kind of vibrant, multi-layered rhythms and catchy melody that is presented in of the first track. It is a delight to listen to... both as part of the whole that is the album... and on its own.

The penultimate track - "among the Nebulae (ambient mix)" - brings us back to the second track and carries on the themes initially presented there... but without the rhythms... to create an engaging and immersive drone-led somascape. There is a "blade runner" feel to this track... a delicious hint of late-night melancholy that reminds me of Vangelis' seminal soundtrack.

The last track is also the title track for this release - "the stars and afterward" - and for it Wilkerson has gone for his trademark warmth and inclusive ambience. He really does create the best somascapes and this is a prime example of them. A true delight and a fitting end to the album.

I would heartily recommend this album and am grateful to Wilkerson for sending me a copy to review. If you like ambient and/or electronic music then this release would make an excellent addition to your collection. Have a wee listen below to hear what I mean.