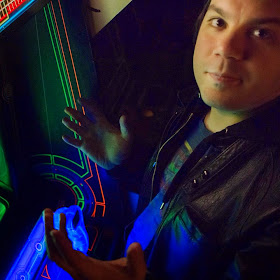 I'll admit to being a bit of a chancer sometimes ... I figure you have to make your opportunities, without being rude about it, when one is presented.

Case in point is a conversation I had earlier in the week with Mogi Grumbles. My friend SDA is a huge soundtrack fan ... obsessed to the point that's pretty much all he listens to. I love his dedication and geekery, and get a lot from his love of this form of predominately orchestral music. He is on holiday at the moment and, while away, I suggested he check out the music of Mogi Grumbles ... a musician on Moodgadget who has re-scored a couple of my fave films - Tron & Escape from New York - with a more 'now' soundtrack of Ghostly-esque analogue electro.

I sent this recommendation via Twitter ... and Mogi Grumbles replied to say 'thanks'. I hadn't @'d him in or anything ... I wasn't being intrusive ... and, as such, I really appreciated his contact.

So, while we talked briefly, I asked if he'd be up for answering my wee blog interview. I'm delighted to say Mogi Grumbles agreed!

1) Who are you and what do you do?
I am Alex aka Mogi Grumbles, I make electronic music ranging from hard electro dance jams to slower more ambient soundtrack stuff.


2) What are you working on at the moment?
Right now I am finishing up another video game soundtrack for http://www.perfectwavegames.com/ on their game "Gravitanks".


3) Who inspires you?
- Name an artist who has inspired you.
Firstly my friends and peers from Moodgadget and Ghostly. I've been blessed to have grown up here in Ann Arbor alongside those guys.

Secondly the biggest names that have influenced the last couple albums have been John Carpenter, Boards of Canada, Umberto, all the Italians do it better stuff and the Drokk album. Before that, Daft Punk, Justice, the rest of the Ed Bangers and a lot of the older guys too. Underworld, Orbital, stuff like that.

- Name place that has inspired you.
My studio is pretty inspirational to be in when it's all cleaned up, but one of my favorite places to work at back in the day was at a pub. Me and a couple friends would go grab a pint or two and bring our laptops and have a "beat off." It was like a friendly competition to push the other guy into writing some music.

- Name some "thing" that has inspired you.
-As much as I hate to say it, new gear has always been a source of inspiration. Or old gear for that matter... I just like keeping it fresh. I do have some staples that I'll never get rid of, the SH 101, the Moog, but I do really like finding new sounds from unfamiliar hardware or software. Getting into the individuality of a particular synth is intoxicating to me. Every synth is completely unique.


4) What drives you to do what you do?
I've always been driven by the fun of it all. It's incredibly fun to make music. So I try and keep it fun all the time. If I had to rely on music to be my main source of income it would stress me out too much and I think it would really kill my motivation to have fun and be creative.


5) What values do you wish your creativity to express?
I don't really have any values in my music, it's fairly simple in that regard. There is a range of emotional tones I.E. this song is a "sad" song vs. this is a "happy" song. I get a lot of feedback from programmers saying they really enjoy my music while they code. Something about the instrumentals and the driving beats probably helps them stay productive.


6) What role does community play in what you do?
It's a pretty big deal to me. From my immediate peers that I've known personally to the people I've met through the world wide web. All I require is at least one person to say "good job" or "thanks" and I'm a happy guy. So I've felt extremely humbled from the Fract OSC fans who've reached out to say that to me.


7) What is next for what you do?
After Gravitanks I've got a couple more "re-scores" I'd like to do. One solo project and the other a collaboration. I don't want to say too much about either one at the moment in fear of jinxing it. But after my little break from Fract OSC - http://fractgame.com/ - it's back to the studio. Looking forward to getting some new equipment to play with!