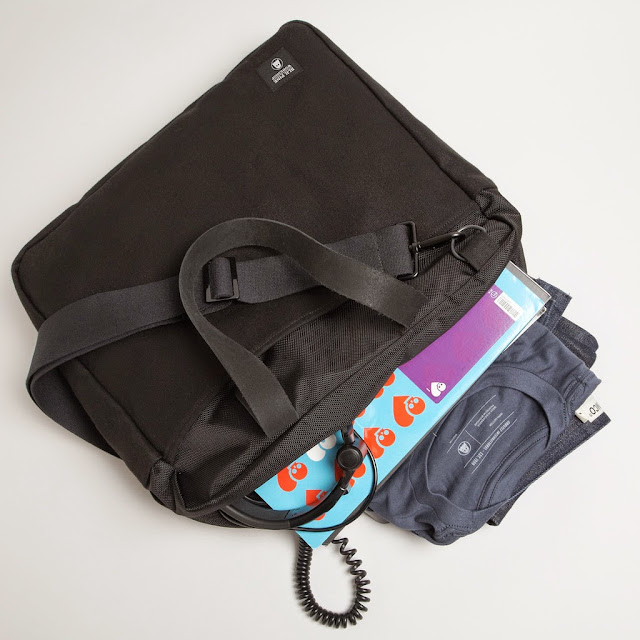 I haven't posted about a Record Bag for a while. I'm really taken with the Eastpak bag I found. However, this bag, a weekender from BLK PINE WORKSHOP and GHOSTLY INTERNATIONAL really caught my attention.

Billed as the ideal bag for DJs and weekend travellers alike ... Ghostly x Blk Pine Workshop's aptly named "Weekender" offers the perfect amount of room to carry a few changes of clothing along with 20 vinyl records. 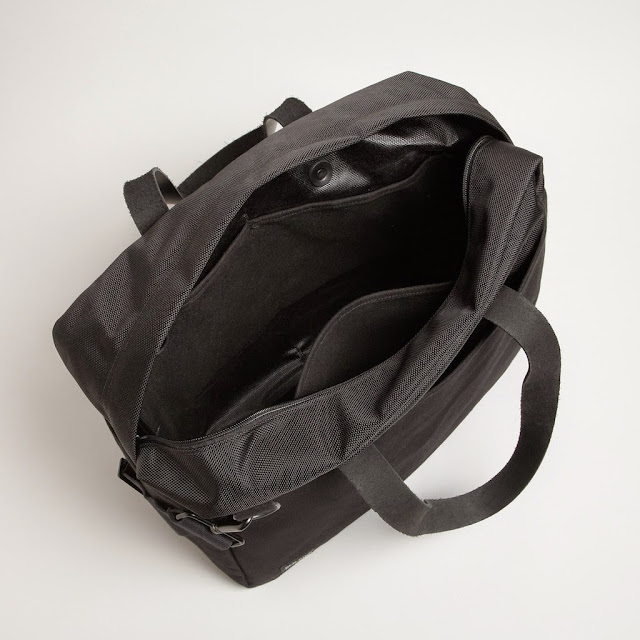 Posted by weareallghosts at 8:00 am No comments:

Loving ... Inside Life by Bruno Sanfilippo 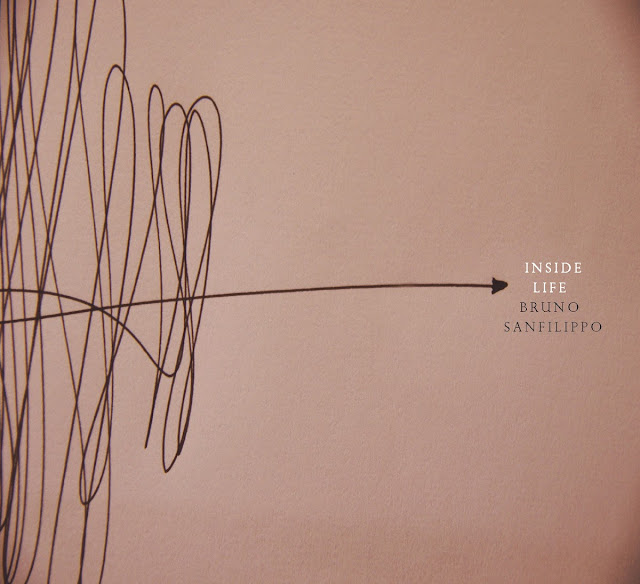 "Inside Life" by Bruno Sanfilippo is abstract neo-classicism at it's very best: adventurous and inspiring, courageous and ’out there’ ... yet wonderfully introspective and bare, minimal and refined; I found it a joy to consume.

There is much to be said for this kind of abstract expression: the piano, strings and percussive found-sounds all playing their part to set "Inside Life" afloat and, in doing so, creating an abstract dreamlike state that I found mesmerising.

It is a remarkable album that could easily be the soundtrack to a slightly off-kilter character-driven movie with all it's intricacies and repeated themes. In places I was reminded me of Mica Levi's seminal soundtrack for "Under The Skin" and that is no bad thing.

Julián Kancepolski's expressive cello, under Sanfilippo's direction, both complements and juxtaposes the piano and electronics presented. Sanfilippo paints with sound and utilises all the elements at his disposal to create.

And create he has, moulding wonderfully expressive soundscapes such as "Camille", a tribute to Camille Saint-Saëns that features the voice of Mariel Aguilar, whose voice provides a haunting nature and makes the track an utter delight ... the sparse opener "Sudden Quietness", a track that really sets the tone for the whole album with it's periods of silence that complement the melancholic strings ... or "A Door Opens Forever", a track the piano masters of yesteryear would have been proud of. Sanfilippo is a talented individual, he even lends his voice to the final (and title) track, the eerie "Inside Life".

I would highly recommend "Inside Life" to anyone with a passing fancy for abstract neo-classical expressionism. Bruno Sanfilippo has done himself proud.

Posted by weareallghosts at 9:01 pm No comments: 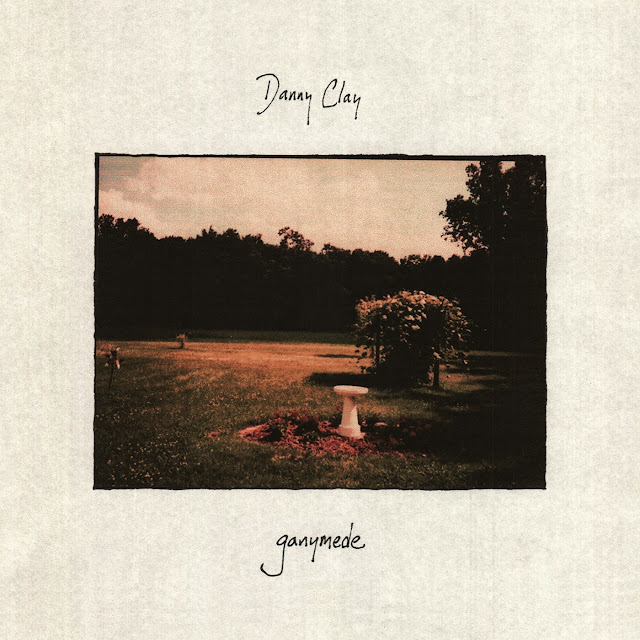 I have grown to really cherish the music that Hibernate puts out. Hibernate is a micro-label from Halifax in Northern England that specialises in releasing the most heartbreakingly beautiful ambient music. Run by Jonathan, they focus on more electroacoustic, glitchy sound-sculptures and feature such ambient heavyweights as Will Bolton, The Inventors of Aircraft, and Danny Clay (who featured in a wee interview last year ) on their roster.

Hibernate have three current releases that are worthy of your attention:

First off is "Ganymede" by Danny Clay. Clay is a musician whose previous output has struck a chord with me. He takes a very relaxed yet deliberate approach to his craft, creating soundscapes with depth and imagination. According to the release notes, "Ganymede" was created entirely from the opening bars of a Schubert art song, "Ganymed" based on a text by Goethe. In the poem, the speaker becomes profoundly allured by the beauty of God as manifested in the emergence of spring.

The notes go to to describe what Schubert's Ganymed means to Clay: it sits at a strange intersection between innocence and loss, childhood and maturity, the beautiful and the sinister.

I can't think of a better description for this release: one that sits in the intersection of innocence and loss, childhood and maturity, the beautiful and the sinister. It is in this juxtaposition, this uncertainty, that the music comes to life. Glitchy pops and foundsounds interact with divine melody to form something entrancing. I found "Ganymede" to be wondrously hypnotic: music to escape to, a destination for the times I needed to feel both what has been and what can be.

Danny Clay has done it again, he has created something of worth & I commend you to check it out. 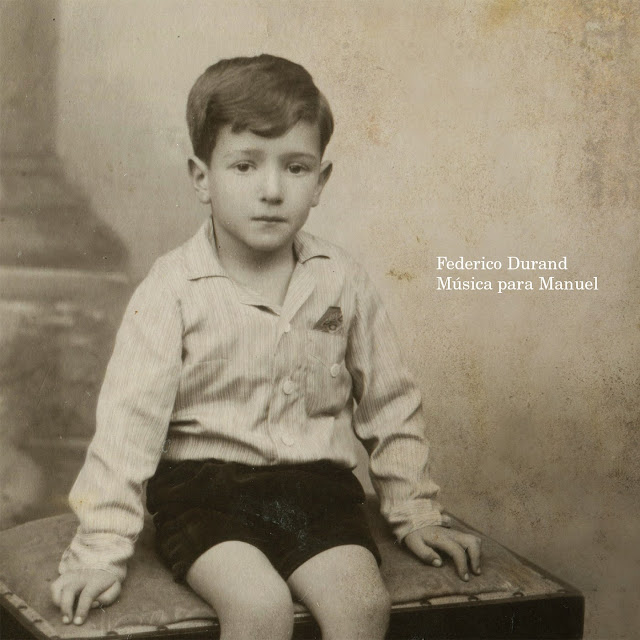 Federico Durrand is a new name to me. His album  - "Música para Manuel" - is a series of five tracks that vary in length from over 13 minutes to under 3, five magical expressions that captivate and entrance the listener with their sounds and their silence. Durrand has managed to capture the essence of Brian Eno's early ambient work by focussing as much of the gaps in the sound as much as the sounds themselves. I, for one, am mesmerised by his ability to do this. Drones and motifs derived from found-sounds and glichy pops are present but they presented in the most delicate and gentle manner. In fact it is the unweathered, unhurried elegance of the music that captivates me the most. This is music for a summer's day, where warmth and beauty surround and inspire.

I was certainly inspired by "Música para Manuel" and commend Federico Durrand to you. 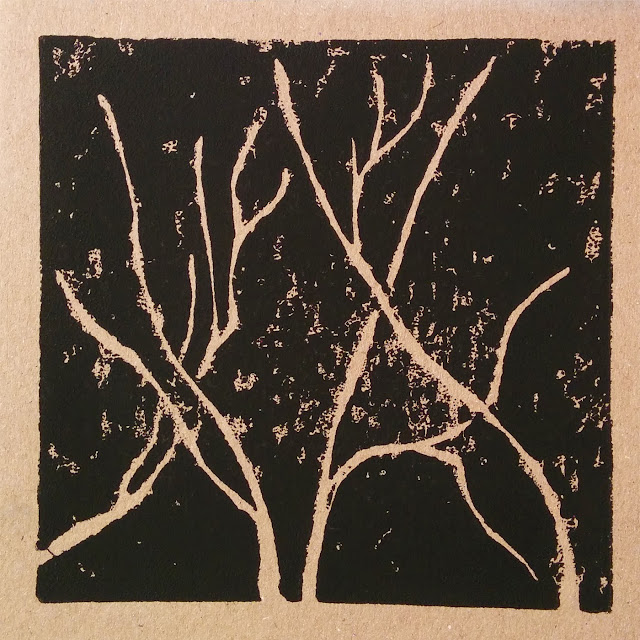 The last release I wish to consider is something completely different from the first two but yet somehow in keeping: "Through the Winter Woods" by Tegh & Kamyar Tavakoli. It features three drone-based tracks that make the hairs on the back of my neck stand on end. The opening track - “hollow” - is an exhilarating journey with a decidely euphoric climax, it is a track I thoroughly enjoyed and one that will find it's way onto a circumambient mix in due course (with Jonathan’s permission, of course). The remainder of the EP - “Fractal” and “Disappeared Stratum” - is similarly euphoric. Big, open soundscapes are presented with walls of sound that simply enthralled me.

I'm not one for noise but in the context of this EP, in the manner it is presented, it just works - Tegh & Kamyar Tavakoli use noise almost as another instrument, instead of having frantic, shoegazy guitars... they use noise and use it very well. "Through the Winter Woods" is an excellent EP that left me wanting more from the partnership.


Hibernate are one of the most exciting micro-labels around and sit strongly in comparison with their peers: labels likes of Twice Removed, SOFT and Elian Rec. I look forward to hearing more from them and hopefully getting to know Jonathan that bit better.

Tx
Posted by weareallghosts at 9:18 pm No comments: 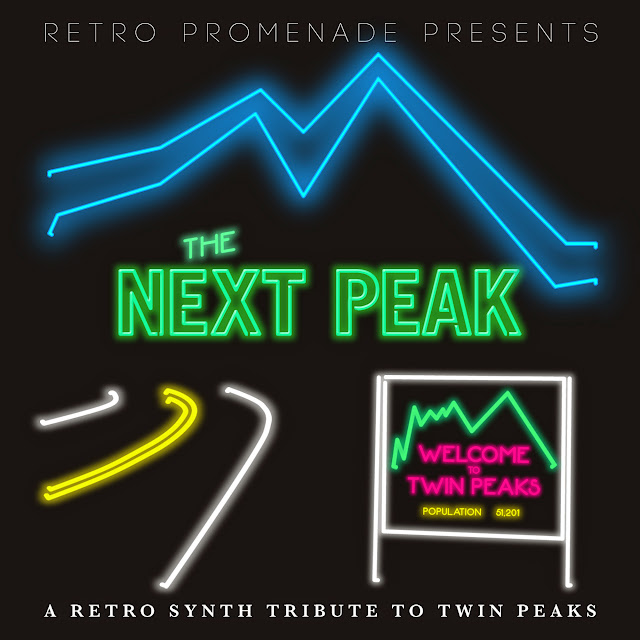 I'm coming late to the Retropromenade party but so glad I’ve arrived. For those of you who don't know about Retropromenade, they are a label that specialises in synthesiser remakes, reworkings and revisionings of familiar music along with original music that draws on the rich, wide, expressive synth tradition.

It was through their recent work based on Twin Peaks entitled “The Next Peak” that I got to know about all they had to offer. I’m a bit of Twin Peaks fan and volume 1, their tribute of Angelo Badalamenti’s soundtrack, really caught my attention, both as a faithful cover and as an innovative expression in its own right. It is a masterful compilation where each track brings something unique to the table and yet there is a distinct consistency apparent. 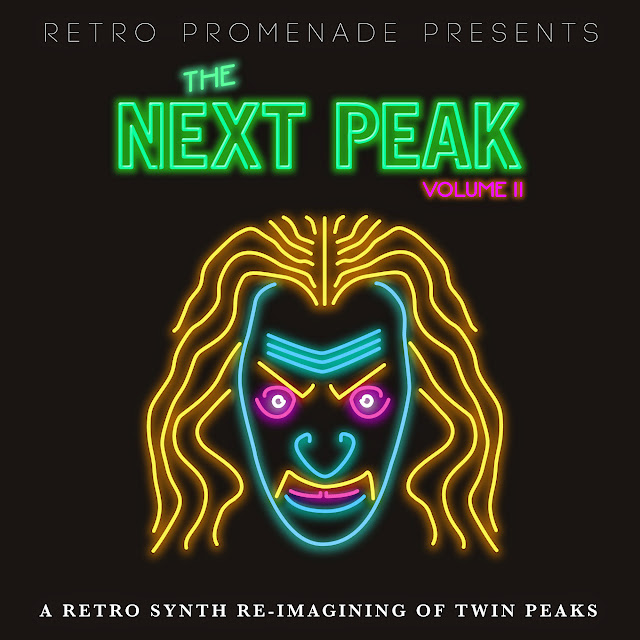 Volume 2 is more of a reimagining from the source material and is just as strong, albeit more imaginative than faithful; with the third and final volume in the series a compilation of original music inspired by the show and it’s seminal soundtrack. If you love the show and love synths then you will be like me, in aural heaven. 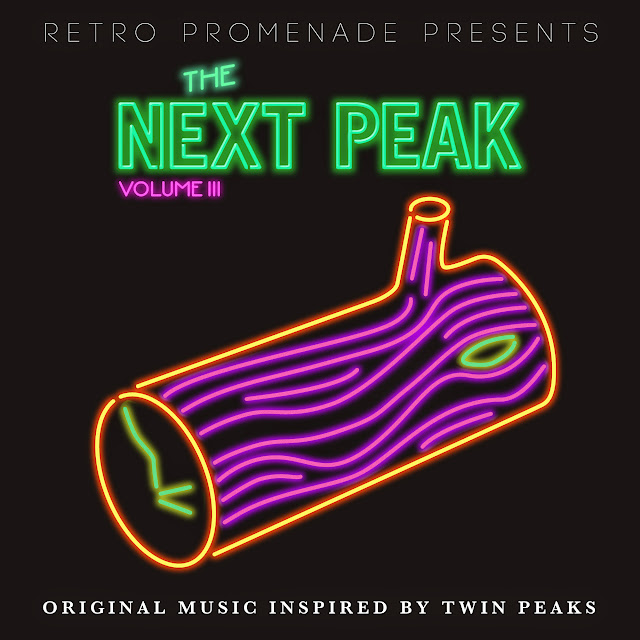 They have other music on offer from their Bandcamp page, pieces like a tribute to Batman which is very good and extremely vivid, albeit with a slight video game soundtrack feel. Retropromenade’s offering has a very 80’s aesthetic, both musically and visually; it is something I find refreshing but may not be for everyone. 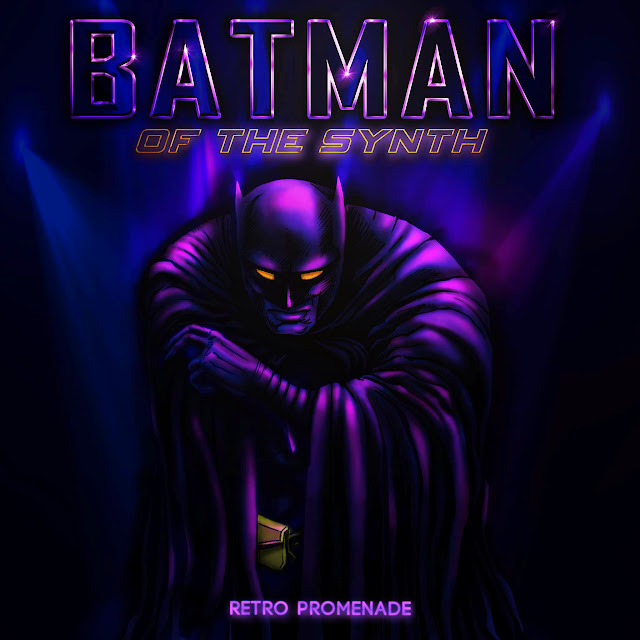 If you are like me and on a bit of a sythn tip at the moment then I would heartily recommend you check out Retropromenade’s bandcamp site, their Next Peaks content is worth the visit alone.

Posted by weareallghosts at 5:31 pm No comments: 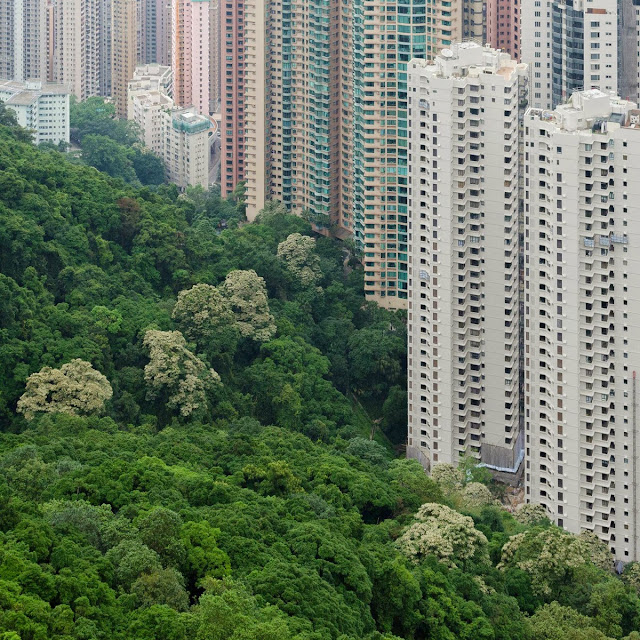 “Different Streams” by EUS, Postdrome, and Saåad is a very interesting proposition: three unique talents in collaboration, developing and then presenting something rather wonderful for wider consumption.

To my absolute delight I can confirm that the creative synergy displayed on this SOFT Recordings release is one so tight, so together that it is impossible to know where one artist starts and the other stops. There are no seams on show, no means of differentiating between the artists, just exquisite experimental soundscapes.

What is presented on this album is an utter delight to me - music of such depth and emotion that it was hard not to be moved when immersed within the tracks. This is music of cinematic proportions: the rasping synths that give a vastness of scale to the track “wait”, for example ... or multiple layers of sound on “the only path” ... could easily provide backing to a cult celluloid masterpiece. I found myself delightfully lost in the various soundscapes on more than one occasion.

There is a real risk with this kind of ambient expression that ideas can be overplayed to the point of monotony. Repetition is a useful technique but it can be overused but by adding additional layers of sound, the artist can keep the overall sound fresh and ensure the continued attention of the listener. “Different Streams” is set apart because, quite simply - EUS, Postdrome & Saåad know this, they get it and they do it ... they keep their music alive and fresh using elements like birdsong and other found-sounds, or percussive elements such as the skittering sound in “Snowfall”. These additions keep the wolves of monotony from their door and, as such, I consider “Different Streams” to be an exemplary album, a 52 minute masterclass in ambient sound-sculpture, one that I would highly recommend.

As for the highlights, other than those mentioned above, “Deaf Implodes” is haunting in a John Carpenter kind of way, disconcerting yet highly addictive ... and the penultimate track “Fractus” is an utterly compelling soundscape with rain pattering down, waves of sound crashing and an unshakable feeling of Blade Runner. In fact, Roy Batty’s monologue at the end of the film would not be out of place layered into this track.

From beginning to end, “Different Streams” by EUS, Postdrome, and Saåad is a belter of a release. It is next level innovative and a real joy to consume. If you like atmospheric sound-sculptures, this is a “must have” release.


Posted by weareallghosts at 8:00 am No comments: 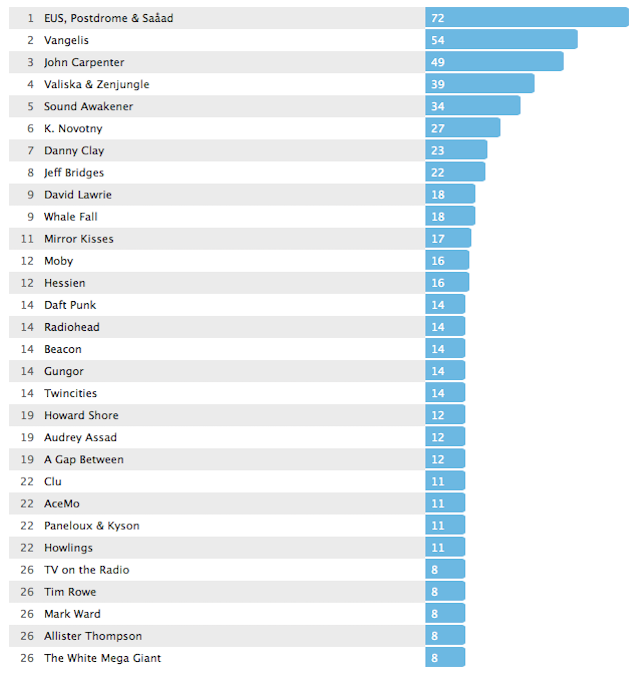 I heard some great sounds last month. My review of “Different Streams” by EUS, Postdrome, and Saåad will drop tomorrow ... needless to say, it's a cracker!

Other music of note that I haven't covered includes Danny Clay's latest release for the awesome Hibernate Records ... I'm currently formulating some thoughts on it ... and K. Novotny's latest.

Lastly, David Lawrie's debut album is amazing ... I supported his bid to get his album self-released on vinyl and can't wait to get the LP. It sounds great on mp3, so I can't wait to hear in on vinyl.

Tx
Posted by weareallghosts at 10:49 pm No comments: