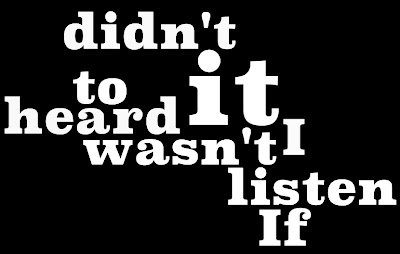 A good friend posted a note on my Facebook wall...

Liked your top 10 albums of the year. Though what did you think of Bon Iver, Deerhunter and Shearwater??? Surprised they were not up there;)

...and it reminded me that I hadn't explained my one rule of Top Ten albums... and, in fact, posting on the ol' nanolog - I only list albums I have heard.

I have listened to each and everyone of the 39 albums I listed... and have been moved/inspired/touched/energised by them in some way.

I have subsequently picked up The Ting Tings and Alphabeat... and would have included them somewhere if I had heard them prior to posting.

As such... in the spirit of only rating what I consume... I really want to hear the following:
Any other albums to add to this list?

Please check out Refinery29's Top Twenty of 2008 and check out the MP3s they include to sample the album.

Posted by weareallghosts at 12:58 pm