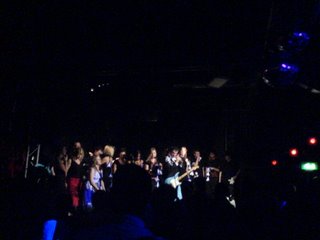 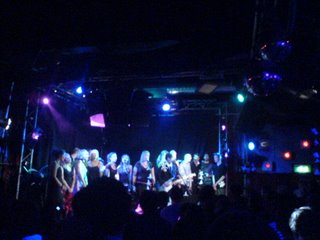 I am an only child...but there are 2 people I consider to be blood : Janey is my long-lost sister... and the Soos is my bro! It is always good to see him but when sushi, cool tunes and the best media totum are involved... its sweet!!!

Made it through to Edinburgh in time for our 1830hrs booking at Sushiya : its a wee place and it was turning folk away! I am always reassured that I am eating authentic when its busy... means its special. The service was really slow... I actually thought the tempura was coming from Kyoto via FedEx... but this meant more time to talk with the Soos.

We talked about stuff... about people... just caught up! Fab!

We then fired through to the Bongo Club - well to the place the Bongo Club used to be... We eventually found the new site after a couple of Starsky and Hutch (I'm Starsky) car chase scenes passed the new Scottish Parliament (£400m+ well spent - it looks fab in a car in a hurry!)

We got to the club just after 2100hrs and it was heaving... 350 folk enjoying a very funky, rootsy gospel choir singing about "the Master's joy" and about how "he's all I need to get by"... Tremendous. We caught about 45mins of their performance and I was well impressed :: this is Mama Popcorn's third live performance. The music was tight and well funky...and the singers were passionate. Their rendition of the eminem song that goes on about "having one chance" was ambitious but ultimately their weakest moment. I don't regret missing their first hour - it was quality Soos time - but I am eager to see a full set. I am impressed and have them firmly on the radar.

If I were to compare them... I'd probably say the Polyphonic Spree but with more raw funk. Dave, the frontman, was really impressive... guiding the choir while playing some raw guitar. His "am I bothered" during the call and response of "Joy" was a priceless moment.

It is so good to go to a smoke-free gig! and I have to say the vibe of the crowd was really mellow and sweet... nobody was obnoxious... There was a wholesome vibe which was nice...

We caught up with Paul & Fi aka DJ Haggis and his missus... they were on filming duties... We talked about the next Dreamday in Edinburgh - going to try my best to get there.

We headed back to the Soos' flat... seeing loads of cows for the Cowparade on the way... and the Soos showed off his Mac Mini... Watching HD trailers should only be done on 42" or more... Cars for example looked amazing!

It was a fab night - thanks bro for your generous hospitality. I also appreciate your company at the gig - I appreciate the effort you made for me!

Posted by weareallghosts at 12:17 pm

As always, it was a real pleasure spending time with 'The Headphonaught'!

Thanks for the kind mention dude!