Got a couple of new toys delivered today :: 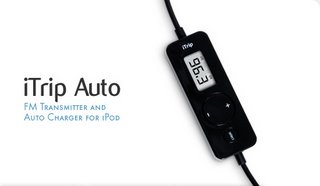 First off is the iTrip Auto - bought a new car recently. Downgraded the MPV we had to a smaller car (a Vauxhall Meriva) - wanted a car suitable for the whole week unlike the Mazda that was a guzzler through the week.

Anyway... one modern gizmo that I didn't want was a CD player because I was happy with the tape connector for the iPods. Unfortunately, it came with a CD player so I needed another solution for hooking up for tunage. Had a look at Harmon Kardon's solution but it would have involved modifying the car... so I went for Griffin's iTrip Auto. Basically, it is powered through the lighter and transmits my tunage from the iPods (4g and nano) over magical cosmic waves to my new car's stereo. It was really simple to set up and works a treat on 87.9 FM without any interference. Nice piece of kit! 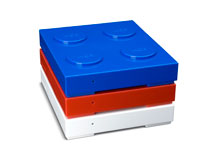 The other toy I received today was a replacement for the harddrive that got damaged at my work. My boss kindly agreed to replace it. I paid a wee bit extra to get the LaCie Brick - its a 40gb USB2 external hdd designed by oro-ito that looks remarkably like a lego brick. It works well and looks good with my iBook (its white). I doubt I'll use it at work but will keep it handy. Another sweet piece of kit.