The graying of the Record Store 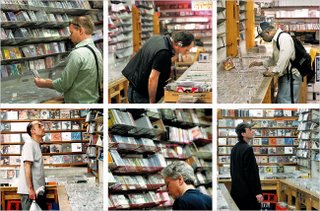 The neighborhood record store was once a clubhouse for teenagers, a place to escape parents, burn allowances and absorb the latest trends in fashion as well as music. But these days it is fast becoming a temple of nostalgia for shoppers old enough to remember “Frampton Comes Alive!’

It seems the neighbourhood record store is under threat from iTunes & downloading...according to the NYT.

It looks like they haven't been to Fopp recently... but I do appreciate the sentiment of the article.

Another bastion of the community... the 'hood... is at risk from the infosupahiway. It is now time to specialise and diversify... or die:

Around the country, he (Eric Levin) said, shops like Grimey’s in Nashville, Shake It Records in Cincinnati and Other Music in New York are hanging on to young customers by evolving into one-stop hipster emporiums. Besides selling obscure CD’s and even vinyl records, many have diversified into comic books, Japanese robot toys and clothing. Some have opened adjoining nightclubs or, in Mr. Levin’s case, coffee shops.

Don't you just love it when coffee comes to the rescue!

The lesson here is to adapt or die... its a sad lesson... I've lost Our Price and Impulse in Hamilton... and apart from Woolworths and ASDA there isn't anywhere to by music in Motherwell. I have to go to one of the 2 Fopps in Glasgow... or HMV... or one of the Virgins (no laughing... but there are at least 2 Virgins in Glasgow).

This got me thinking about the parallels between church and record shops...

Both have had to shut up shop in places due to a lack of popularity... although the record stores have headed towards the urban centres and the malls... and the churches have moved towards the more middleclass areas. Congregations have become smaller... neighbourhoods / parishes are being left unrepresented.

Both offer tremendous "product" and potential for community (I use the word "product" carefully when talking about church - God's grace and love is not a commodity! nor is it for sale - its a freebie of infinite value!) but this is being lost amongst a myriad of instant choice and self-gratification.

Can church learn from Record Stores? Yes... vinyl is increasing in popularity... people are discovering the classics (like me and the Beatles)... there is a real yearning of the authentic... the real... the tangible... that is just as prevalent for the church as it is for Record Stores. The expression of quality over quantity can be heard, first hand, when you listen to a record (in my humble opinion)... or at least a CD. I am Apple's biggest fan... but even I acknowledge the fact that music is better uncompressed... and even better analogue (ohmygoodness... I sound old)

Anyway... where am I going with this? We need to diversify... adapt and grow... move away from nostalgia... without losing a sense of purpose or identity. This isn't about selling any old CD... like the junk you see in Poundstretcher or in the queue at the Post Office... this is all about the music. A Record Store is all about selling records / CDs... its about selling the latest... and possibly most obscure... and building community by hiring people who have the knowledge.

Think local... Support your local Record Shop... before you lose it too!

Posted by weareallghosts at 9:48 pm

Email ThisBlogThis!Share to TwitterShare to FacebookShare to Pinterest
Labels: Faith / Love / Culture, For Your Listening Pleasure

Great thoughts. I wish I had more time to delve in, chew on it and spit out my opinion before heading out. I'll try and remember to do that once I get back.

Fantastic. Thanks for the comment on my save the charity shops post. Love the comparison. Was meaning to say, was talking to martin belshaw recently, hes gonna get in touch about((deep)). I think he's had an extremely similar vision going about in his head. Bless XD