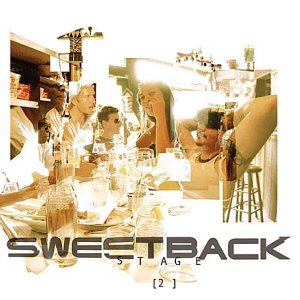 I used my lunch money to buy this CD in the Borders sale and I have say it is pretty firm. Sweetback may never capture my imagination the way they did on their first ablum... but, from what I have heard so far, I think they will try. Guest vocalists are Aya and Chocolate Genius, instead of Maxwell and Amel Larrieux, and they have a lot to live up to.

I am hopeful. Check it out: Link

U P D A T E
Loving this album... It brings something new to the picture in a similar way to the previous album. The vocalists are top-dollar - Aya has an amazing voice that reminds me of Vanessa Freeman... Chocolate Genius has a old-school seduction to his voice that is lovely - different from Maxwell but equally sweet.

Stage 2 is a landscape of new sound, a journey to the heart of old soul. A place where richly textured soundscapes overlap on distant horizons, but then compress so tightly, so intensely - so incredibly sexily - it makes you sweat.

SWEETBACK have the feeling, in fact they have it down pat. They know how to throw those switches and pull all those punches, and all we have to do is roll with them.

Incredibly it's been eight years since they released their self-titled debut album. In that time popular music has shifted gear, and spun off in other directions, but not SWEETBACK. The fundamental open house policy at the heart of the band remains; anything goes, and if it feels right - and it fits - it's SWEETBACK! Deep dub and deep romance. It's about love, any way you play it.

Crucially Stuart Matthewman, Andrew Hale and Paul S Denman haven't aimed Stage 2 at a specific music niche, radio station or club. It's more a case of the SWEETBACK train pulling in and if you want to hop on board, and groove a spell, that's fine.

But SWEETBACK as a slightly enigmatic trio of mystical soundscapes that only records when the constituent parts feel like it is only part of the story.

The other part is SWEETBACK'S knack of bringing other gifted singers, writers and musicians into the mix. Not merely as faceless session guests but as real players. They include Bruce Smith - ex-PIL, The Slits, Pop Group and various reggae bands - who played on the last SWEETBACK tour. Point Bruce at the groove and let him go. Listen to him stamp his emphatic authority on "Circles," an early and mesmerizing highlight of the new set that is sung with true grit by Chocolate Genius. "Circles" is the first of a new breed of anthemic urban grooves, recorded live, in New York City.

Mark Anthony Thompson, A.K.A. Chocolate Genius, is a revelation. The Brooklyn boy with the distinctive throaty voice is featured on two other tunes; the scary and simmering opener "Voodoo Breath (Master's Love)" that cuts like a chain-saw, and the intense seduction cameo, "Jesus Girl!"

Originally from Singapore, and growing up in London, singer Aya met Stuart Matthewman in NYC where she now lives. Soon after that first meeting she and he wrote "Sing To Be Safe" one of those classic SWEETBACK soundscapes with layered textures of keyboards and acoustic guitar and a melody that lingers long after it's gone. In all Aya is featured on five tracks; solo on the album's most irresistible love song "All My Days With You," the Afro tinged Deep House cut "Round And Round," and "Lover," a very special love song waiting for a film scene.

Elsewhere Aya shares vocal duties with Ivana Santilli (who also plays trumpet), and Byron Stingly (formerly of Chicago House band 10 City), and Mecca Lady Bug who SWEETBACK fans will recall once opened for Sade some time ago as a member of The Digable Planets.

Of course, the three man core of SWEETBACK cut their teeth working with Sade, the world's most beautiful singer with the voice of a broken hearted angel. But everyone knows that. Stuart Matthewman (guitar, saxophone, keyboards and programming), Andrew Hale (keyboards and programming) and Paul S Denman (bass and much more) have worked with her since day one; playing, writing, producing and touring. But Sade doesn't do 'The Music Business'. It's not a production line thing with her.

She and the boys only record when the songs are there. It's about the music, and only the music.

But precisely where SWEETBACK fit into the overall scheme of things is anyone's guess. Stuart produces, composes film scores and remixes under the name Cottonbelly; Andrew produces others too along with scoring work, soundtracks for fashion shows, and nurturing an art space in London, and Paul remains true to the spirit of '76 managing his son in LA punk band Orange. Try putting those influences on your MP3 player and hitting random.

Shortly before Christmas Stuart called me up to ask me what I thought of Stage 2, and I went into this rant about how it sounds like this and that and how it's a progression that galvanizes their earlier material, and all the usual platitudes long time friends and admirers get into. Then he says wait! He wants me to see something and he sends me an email.

It read: No category, no format, no preconception, no style, no continuity, no formula, no description, no comparison, no label, no barriers, no rules, no age, no colour, no nationality, no leader, no competition, and last but not least, no apology!

In other words: SWEETBACK Stage 2; no question about it.

Posted by weareallghosts at 4:03 pm