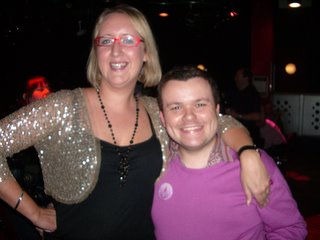 My colleague Lorna and myself... and yes, Lorna is tall - I'm not that wee!

The presentation and the reception went like clockwork... everything work, which was a blessing. My presentation sampled the original "Top of the Pops" theme, "Every 1s a winner" by Hot Chocolate, the "Mastermind" theme, "Battle without honour or humanity" by Tomoyasu Hotei, and "Jingle Bell Rock" by the Ventures... I had graphics and visuals and animation... I am pretty happy with the outcome!

The reception was held in the Charles Rennie Mackintosh suite in the Lighthouse. I mixed a CD of background music which was well received. THe canapes and drinks were well received, and the choice of venue made for entertaining conversation.

We then went to Jongleurs for their comedy show and disco. The comedy was way too crude at times but was also funny at times... My fav was Rich Hall and his song "I'm the only gay Eskimo" which he sang in various guises like the Proclaimers or Billy Bragg... His impression of Bjork was hysterical. The compare was really, really vulgar! Insults are not really funny... Rich Hall, on the other hand, laughed with you which is the reason why he was far better than the rest.

The disco was average. I hate discos when Olly is not there... I like to dance with her. I had to wait until 0030hrs as Pauly was giving me a lift... I could have gone sooner but didn't want to spoil his fun.

Anyway, a good night was had...which was appreciated by the audience of approx 100 folk. My boss enjoyed the presentation:

I wanted to take the opportunity to specifically thank a few individuals who worked very hard and enthusiastically over the last few weeks to make the events of yesterday possible:
(me) -- sound sampling, uber visuals, communications, concept generation;