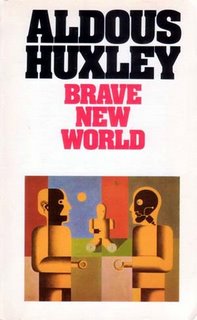 * "Community, Identity, Stability." The motto of the World State.

* "No social stability without individual stability." Refers to mass use of soma to create "stable" citizens who conform to societal norms.

* "Christianity without tears — that’s what soma is." Mustapha Mond's summarisation of the hypnotic, revered drug soma.

* "But I don’t want comfort. I want God, I want poetry, I want real danger, I want freedom, I want goodness. I want sin." John's interpretation of social norms being restrictive, denying him the opportunity to experience the human condition.

* "In fact, you are claiming the right to be unhappy." Is Mustapha Mond's response to the previous quote.

I identify with John. I want God... I want freedom and goodness and real danger. Maybe give or take sin... but I claim the right to be unhappy... I want the Christianity WITH the tears... if it means I can have all this. I want a faith that hurts... that shares in the pain of others instead of focussing in on self.

Oh and you nearly had me as the world state... the way I go on about community and identity... but stability??? Nah... community, for me, is all about the instability of people... of situations... the constant of change... of flux... of movement.

If you haven't read the book... do so. It'll open your eyes to the world you live in presently. This Brave New World is closer than you think... with its genetic manipulation, control sold as freedom through promiscuity and drug use, and faith without any spiritual realism; Wonderful!

Posted by weareallghosts at 10:43 pm

Yeah, it's a great book.