What a weekend! Saturday morning / afternoon 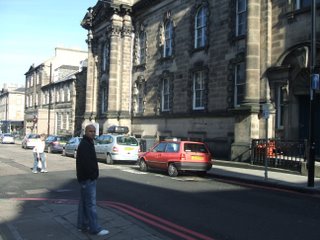 I woke on Saturday to the sweet sound of the A Team soundtrack... Its my generic ringtone... everyone I know and love have their own ringtone - Olly's is superstition by King Stevie... The Soos has an original, one-off tone created for him (and pinched by me) by our friend Dunc... Janey & Roscoe have Moving on up by Curtis Mayfield... and my folks, for some strange reason, have the Baywatch theme (maybe it isn't strange - I'll be there)...

Anyway... I feel like Ronnie Corbett telling a joke... Paul Ede woke me up at 0842hrs > approximately 4 hours since I went to bed. Its all good... I am going to hook up with him and a chap called Alistair on Wednesday...along with my pal, Innes J.

After that I got up...to see the Soos a quivering wreck. Years of consuming hard liquor have created a tollerance for a few beers with me... However, he can't handle his coffee and the moca he had in Beanscene with Roberto and me seemingly kept him up all night with the shakes... ha ha ha!!! 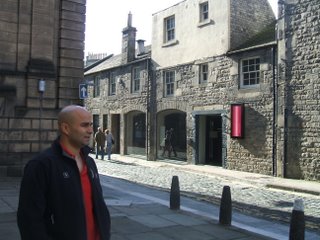 As I said... its all good... we got out and about in Edinburgh pretty early. The weather was wonderful on Saturday morning... Hot... Tee-shirt weather... Nice. I don't think either one of us have been in Edinburgh this early in ages. There was such a nice vibe and the Soos took me to places that I have never been to.

He even bought me my first Moleskin notebook which was totally unexpected and a lovely treat. Bit too expensive for me but I am so grateful and have started scribbling everything that pops into my head down in it. Thank you!

We had such a magical conversation on community... people... style and style bars in Edinburgh... family... life... Truly magical. I hope I helped the Soos to frame some of the things in his present...and demonstrate the love I have for him. 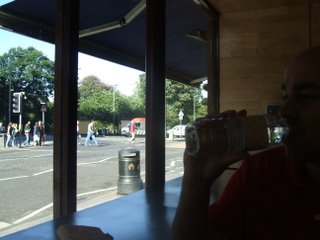 We grabbed bagels and coffee in Chocolate Soup and talked more. We both want to travel... see places like Barcelona... and I realised that two of the worlds most amazing places are on our doorstep - Edinburgh and Glasgow. Need to see more of them... especially on a day like today. 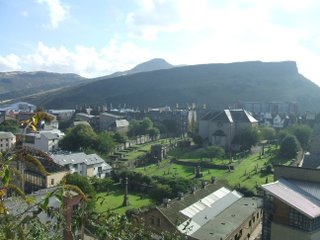 I had arrange to meet up with Paul Thomson aka weebeautifulpict aka DJ Haggis at the Beanscene near the Scottish Parliament. We had such a beautiful walk getting there. I saw a part of Edinburgh that I hadn't seen before... and was amazed.

I also need to go on record and say I LOVE THE SCOTTISH PARLIAMENT - sure it cost me...and every other taxpayer in Scotland a fortune... but it is striking, imaginative and innovative; it has a soul and is unique... just like the Scottish people. It involves you... kids were skateboarding - using the street furniture... folk were lounging on the grass... and steps... and spaces designed for people. Lovely. Need to take the we'ans to see it. 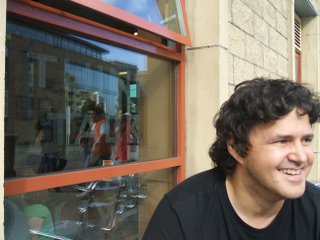 Caught up with Paul and his better, superior-in-every-way, half Fi... I was so glad that we could just talk... The Soos joined us and joined in the conversation which was lovely... Paul asked about ((deep)) and my plans. He has an amazing way with words and he spoke passionately about the need to set up new expressions of church in greenfield sites... places like the arts... digital media... music... places where Jesus is but the church isn't.

He talked about not setting up in competition with other churches - a point the Soos picked up on later to say that if you have something unique... then you are not necessarily competing - one of the few upsides of denominations! Paul also spoke about creating true community rather than colonisation - which got me thinking. ((deep)) isn't about competiting with what is there... its about filling the gap for our youth... bringing movement back to them, in a sense. Going back to go forward.

Wonderful! I intend to bring Paul in on this as a personal mentor... his 20-odd years doing this will help me greatly.

Afterwards... the Soos and I headed back into town and met up with a chap called Phil who is a pal of the Soos and his younger brother. We headed to Cult Clothing where the Soos picked up 4 super-sweet hats by a brand called Goorin - Phil was raving about them and the Soos needed some head coverings. Unfortunately they don't do planetoid size... so I was limited.

We then headed back into town... Back to George St... The Soos needed towels so we headed to The White Company for a wee bit of luxury. We left laden with great product and a sneaky sense that the sales assistant thought we were a couple. Hmm!?!

It was great to spend some time with important people in my life... and I am grateful for the blessing.

Posted by weareallghosts at 10:37 am

Cool you got to see the man, DJ Haggis! LOVE his music! Also, moleskin notebooks ROCK!! Glad you were treated to such a nice gift! Be blessed and have a fantastic week! EP