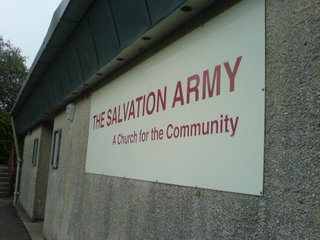 Olly and I led the Music Ministries Weekend at the Cumbernauld Salvation Army and received such a blessing from being part of such a vibrant expression of God's grace in the Kilburn community.

On the Saturday night, the YP Band and Singing Company from Edinburgh, Gorgie led the meeting. Theirs was a geniune expression of faith and was wonderful to be part of. Olly sang a couple of songs and I was asked to lead the benediction... which was no easy task. 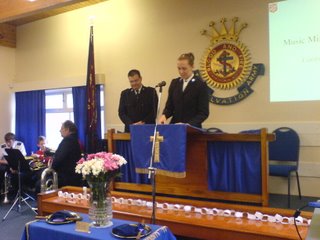 On Sunday morning... Olly led worship... with a focus on faith and works... and being a symphony of praise. She is a gifted girly and I was proud to be there with her.

We then shared in a meal with the Corps officers - Donald & Anne Montgomery - and kindled a friendship. They have the privilege of overseeing and guiding this alive community... and they are doing their part in the community with their approach to incarnational living. Good food too!!!

Afterwards, we were passengers in the Sunday Club - we were glad to watch 30 or so kids praise God in an environment relevant to them. Marion, the YPSM, has their trust and that's a lovely thing to witness. 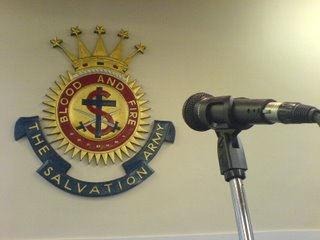 I led the meeting in the afternoon and spoke about 1st Corinthians 13 - having love in all our actions and being love in our community. It was a great experience and one that really moved me when we were referred to as our kind of people in the "thank you" at the end. Here's my thought: ((link))

Cumbernauld reminds us of Olly's home corps of Fauldhouse... where everyone mucked in, there was no hierarchy and everyone was there for the right reasons... at times it is a million miles away from Bellshill... and is the inspiration for my holy disquiet. The folk there were so alive to God's possibilities... John & Evelyn, David, Janice, to name a few... were all on fire for Him... and were electric to be with. 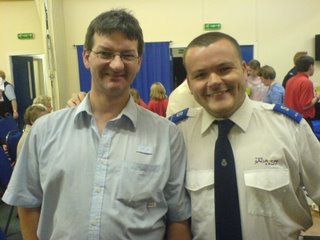 Big shouts out to Ken and his wife Tracey... Ken reads the ol' nanolog as well as Olly's blog... and was very complimentary.

Ken... leave a comment... get involved... but more so, do what God calls you to do in Cumbernauld. Be who He wants you to be! 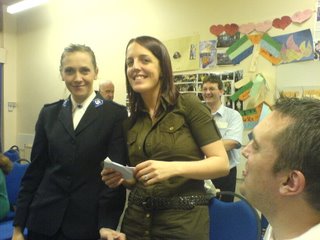 It was also fab to catch up with an old friend... Lindsey... and her hubby, Simon. She is so focussed on the kids and is a real enabler with them. It was great to hear of her wee team who do gardening for old folks and get involved... hands-on... in their community. You go girl!!!

What an absolutely fab weekend!

Posted by weareallghosts at 8:40 pm

yeah, my friend steph from gorgie was there, said it was a good time and that its good to put a face to the ((deep)) thing i mentioned! Funny how if you dont know someone in the army, you will likely know someone who knows them. Close knit community.

Great to hear it went well! We also had a great time at our music ministries weekend (strange they were on the same weekend). I'll put something on my blog about it before long :)

oh man, you guys where those uniforms! I had no idea!

Of course we do, bro... got to be in it to win it :-) altho' I have to say I am too fat to fit into my jacket and wear short sleeves in winter.

btw love the beach shorts on your FLICKR pics... nice!

Followed the link to read your message - good thoughts and challenge,

hey tommy ,ive got the blog ,er bug now, ive started blogging !!
and once again thankyou for your ministry to us on behalf of all here at cumbernauld.

Glad your ministry was well received there Thomas. Sure you and Olwyn did God proud in the truest sense of that word. Keep going guys. Blessings upon you and your family.
Dan

sorry - me again! Good thoughts in your message Thomas. A blessing to read.
Dan