Clean up the neighbourhood... or leave it alone? 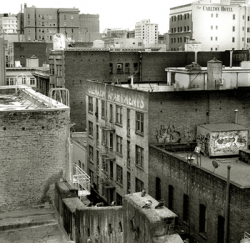 Interesting post on ((Gridskipper)) about the opposition a lassie received for trying to smarten up her area ::

The WSJ carried an interesting story today about a woman whose quest to clean up the Tenderloin's streets raised the hackles of the seedy denizens of the neighborhood.../

I'm not big on the whole gentrification thing... Olly and I live in North Motherwell... we live in a nice house in a nice part of a pretty rough area. That's the draw of cheap houses. Thing is... I love the character of the neighbourhood and want to give back - I'm now (as of tonight) the secretary of our neighbourhood council... and do enjoy walking around albeit preferably in the daylight.

Point is... I moved into the neighbourhood and I want to be salt and light... but how do I do this without affecting my surroundings to their detriment?

In the article, Carolyn Abst, was criticised for trying to tidy up a bad area in SF by the very people she was helping out.

This got me thinking about work in deprived areas... are we making a difference without stripping the place... the people... of their uniqueness and identity?

Its the whole Derek Webb quote about the lie that Jesus is a white, middle-class, Republican and for us to get saved we need to be like him! Derek is right - this is nonsense! Are people who are introduced to God's wonderful life-changing grace expected to become just like us... like me?

Hmm... Gentrification isn't good if poor people lose out to the rich... but surely there is a new compromise that comes from positive change? especially with regards to spiritual matters? do we not learn and grow and benefit from the life experiences of the newcomer? or are we so closed that we expect them to come to us?

Be salt and light!

Posted by weareallghosts at 10:45 pm