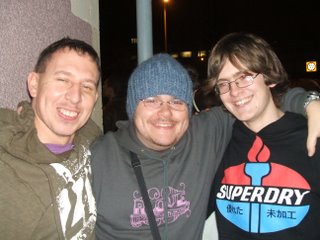 Kenny, the 'phonaught (with Flumps hat) & Al from I'll Fight Club
What a night... first off it was fab to spend time with my good friends and cherised people :: my hottie was there looking... well... er... hot! Janey and Roscoe were there... as were Kenny & Sarahbell. Alistair aka Clinically Proven Human (he's a big commentator on the ol' nanolog) was out on the town. Wee Michelle was there too... and the officers' kids came along for the ride. Mixed group. Good times! 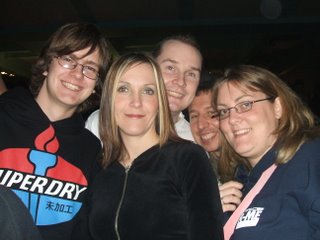 I have never been to the Glasgow Carling Academy before... never really had the desire to see anyone big enough to fill a 2,500 standing venue. (I'm more of a King Tut's or ABC chap) but I couldn't resist seeing Tim Hughes or Delirious? play live. £13.50 is a small amount to pay to be part of such an amazing night. The crowd were wonderful... really responsive to the music... but peaceful and caring. Sweet to see and experience. 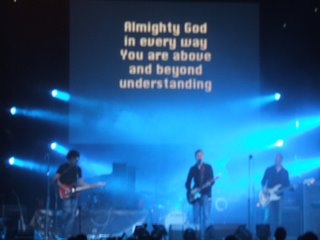 Tim Hughes kicked things off with a wonderful time of worship. This was participatory music with the words appearing on a vast screen. I wasn't familiar with a few of the songs but picked them up real quick. It was a real joy to hear everyone singing along to "beautiful one" and "here I am to worship"... the songs that really brought Tim's music to our attention. Truly wonderful!

His set was pretty low key... it wasn't about him... He was doing what he does best - leading worship and it was great to participate in.

Before his set I briefly caught up with a chap called Darren from my work... which was cool. I also saw some else from my work but couldn't get to him to say "hi". I saw Ken, and Kirsty and her mum (all from Cumbernauld) which was sweet.

After Tim's set there was a fire alarm... which was an inconvenience more than anything. However, managed to catch up with Innes J in the crowd... he's on form and it was cool to introduce him to my lady and our people. 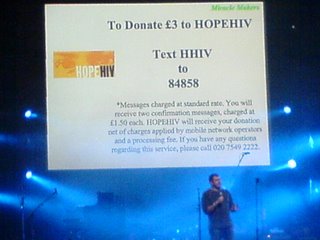 Not long after we got back into the venue, Phil Wall from HopeHIV came on stage and spoke about his charity. He told us about Tim Jupp's 40th birthday where he got everyone to donate to HopeHIV's work in Durban... where he went with Delirious? and had his birthday party there with the street kids. Powerful! Phil asked everyone to donate £3 to the charity by texting HHIV to 84858 - it was cool to see all the screens light up in the crowd. HopeHIV do a great work - support them anyway you can. 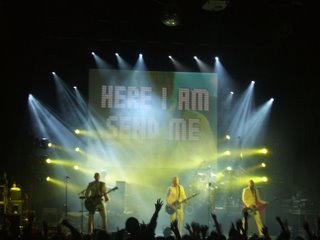 Then on came Delirious? and all I can say is WOW!!! I didn't know what to expect from them... I have World Service and the collab they did with Hillsong :: Unified Praise (Its on the iPod as I type :-)) and thought I had the gist but wow... what a set. They played Rain Down to mass jumping and then took it down into truly beautiful contemplative soundscapes and songs like Majesty (here I am). Skilled. There's was another level of worship... sure it was entertaining but there was so much more. Martin Smith spoke to a 7 year old lassie at the front and told her she wasn't too young to be a woman of God. Inspirational. He spoke highly of Glasgow and in his tour diary you get a feel for why :: ((link)). 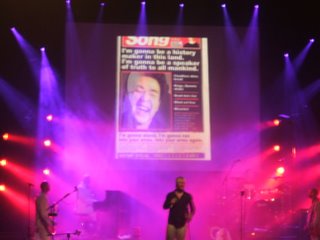 The visuals were awesome... leading worship... with a real professional edge that I haven't seen before. The visuals to History Maker were amazing... using newspaper frontpages (see above) to express the song.

Truly a great night... with only one annoyance... I got caught up in the atmosphere and missed the fact that Olly had moved away for a better view. I regret not being with her at the gig... sharing the experience together... need to make it up.

All in... what a fab evening... great music... great company and a God who is greater!

Posted by weareallghosts at 11:49 am

Glad the gig matched expectations, Thomas. Lard & I thought of you as we tucked into our carbonara at my gaff! Spent a great evening with our respective ladies chillin', eating and exploring the edges of geekdom.

Although I couldn't be there, and as I read your post on the evening of the aforementioned Tim Hughes and Delirious, I got loads of goosepimples at the thought of such a great evening glorifying God.....glad to hear it all went well for God!

Don't know if you have it but my substitute last night was watching 'Facedown' by Matt Redman on DVD...if you want an experience of worship in your front room, get this....

Glad you had a fab time! Delirious are AWESOME!

very cool, i've seen delirious many times (they're my favorite), would love to see tim hughes too. infectious, worshipful hearts they have.