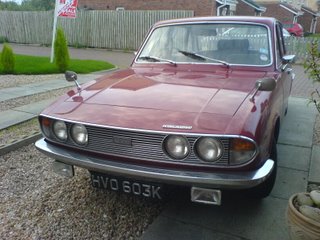 Spent Saturday in the company of Capt Alec (and his super classic Triumph 2000 - above) and some of my great friends in the West of Scotland Division of the Salvation Army.

We were all at a training day hosted by Majs Ivor & Carol Telfer called "Body Building" at a high school in Chryston, Glasgow.

There were 20 seminars... 4 for each of the following topics: Nurture, Evalgelism, Worship, Support and Service.

The first seminar was on small groups and was led by Capt. Alec - he discussed the progress made within Bellshill and related it to some theory on specific groups and cell groups.

The second seminar I attended was hosted by a good friend of ours, Liz Pye... She was so nervous before hand but was just so natural talking about working with children. She spoke of incarnational living and showed a map to demonstrate the fact that she lived, worked and worshipped within a couple of miles of each other. Walking her dog let her meet kids and allowed her to be seen in the community... which made her work more caring and opened the parents up more. 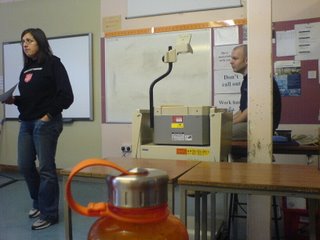 After lunch I attended the seminar on Youth Work led by my pals Jon Godfrey and Capt. Janet Robson. Some interesting ideas voiced... especially when we look at the way the media totally misaligns our young folk.

The fourth seminar was led by Paul Clement on leading worship... which was pretty inspirational and opened my ideas to some areas that need work.

Great day, all in... Fab to catch up with Clarice and find out how Erskine is growing. It was also fab to meet up with Graeme Parkhill to hear how Ayr is getting on - they are buying a property that will host a cafe and meeting rooms and intend to hire a local theatre for Sunday worship which is pretty out there thinking. 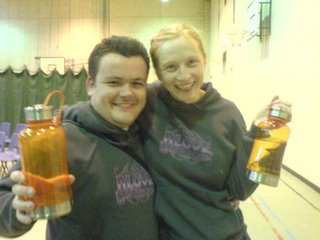 It was great to meet up with Jon's Lorna... although it was odd to see we have so much in common. Great day...all in!

Posted by weareallghosts at 5:08 pm

I am so immensly annoyed that i missed it, I was working. I did however get to hear one of my residents singing jesus loves me at the top of her voice, so that cheered me up.

aww would have liked to have seen janet, aint seen her since music school.

always good to hear about graeme and wendy, can still remember their corps farewell.

grr, wish i had gotten the day off.

Man, i want one of those hoodies! haha