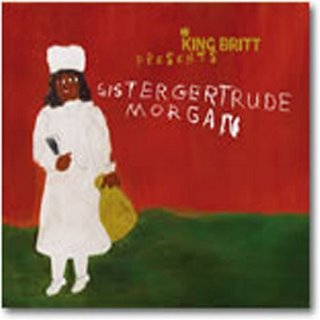 When I was over with the Soos... he was raving on about this album :: King Britt presents Sister Gertrude Morgan :: and I fully agree. It is a wonderful marriage of unique vocal gospel from the charismatic Sister Gertrude and the beautiful soundscapes of King Britt. Its the sweetest, most soulful thing I have heard in years...

Been wanting to hear the album for a while :: almost 10 months :: and am delighted to have it. Thanks man!

Here's the story from Ropeadope ::

Sister Gertrude Morgan (1900-1980) was a painter, singer, and self-proclaimed "bride of Christ" whose visually explosive folk art is celebrated on the museum circuit world-wide. But her one album, made in New Orleans in the 1960s, is one of black gospel music's secret relics. Those recordings were unearthed and a limited number of copies were released to unanimous and widespread critical acclaim in 2003.

Ropeadope has procured the master rights and enlisted internationally acclaimed DJ and Producer King Britt to create an entirely new and ground breaking work, putting musical tracks behind the Sister's previously unaccompanied vocals. In the studio for over 12 months working on this project, King hired a crew of stellar musicians to create the ultimate backing band and produce one of 2005's most promising releases.

Posted by weareallghosts at 8:55 pm