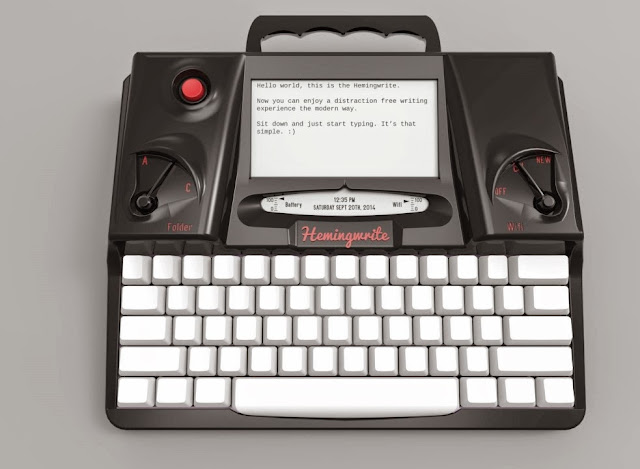 "The Hemingwrite is designed like an old-fashioned typewriter but does also manages to keep some modern technology. It has a 6-week battery life so its perfect if you write better away from civilization, ample memory, instant on so no time is wasted on booting up, and a high contrast screen so it’s easy to read in daylight or at nighttime. It also has WiFi and Bluetooth capabilities, allowing it to connect to Google Docs, Evernote, and the Cloud. The best part of all is that stylish old-school look and feel of a typewriter that completes the writing experience."

I really like the look of the Heamingwrite ... read more over on PSFK or Hemingwrite

Norway has a new passport ... and it is gorgeous!


Neue, a multi-disciplinary design studio based in Oslo, has given the Norwegian passport a minimalist makeover. The new designs have crisp, block color covers which come in white, red or turquoise. The pages reference the country’s stunning scenery and famous fjords.

Take a look over at PSFK


"But when nerds figured out how to play music over the Internet, it rendered indie culture inert. The shift away from physical albums destroyed that mechanism of consumer individuation. When getting into a band became as easy as typing its name into a search box, particular musical tastes lost their function as signifiers of commitment. What you listened to ceased to be a measure of how much you cared and became a mere list of what you liked."

An interesting critique on streaming music that I can relate to ... music snob that I am.


"The way that work looks, feels, and functions is in the midst of a dramatic shift. Every time we have gone through a major shift in work in the past, we have had to learn new skills to support it. We had to learn the work of agriculture. We had to learn how to work on an assembly line. We had to learn to use typewriters and fax machines. So the question now becomes, what do we need to learn that will help us thrive in this new world of work today and ten, 20, 30 years from now? From my experience, I see three of the main categories of skills as: problem solving, technology, and self-management."


"Seen in New York, LA and everywhere in between, the Lumbersexual is bringing the outdoor industry’s clothing and accessories into the mainstream."


The Rise Of The 'Lumbersexual'


“The best ideas start as conversations. A small change at the beginning of the design process defines an entirely different product at the end. At the start of the process the idea is just a thought- very fragile and exclusive. When the first physical manifestation is created everything changes. It is no longer exclusive, now it involves a lot of people.”


"I don’t think I’ve even heard more than three Taylor Swift songs, but the idea that artists are “insulting” or “greedy” for asking people to pay a relatively modest amount of money for their art is pervasive in today’s culture. People make these same claims about indie authors, bands that can’t afford a tour, and struggling illustrators. I’ve seen people proclaim that midlist novelists who can’t even make a living off their books are “greedy” and “evil” for asking more than 99 cents for an ebook. I’ve seen readers who admitted to pirating every single A Song of Ice and Fire book say that George R. R. Martin “owes them” a quicker publication date and that he should essentially give up all his hobbies and other projects until he finishes his next book."


Taylor Swift and the Myth of the Mean Greedy Artist

The world's most beautiful metro stations - in pictures


"Christopher Lee has precisely one line in the recent trailer for The Hobbit: The Battle of the Five Armies, but his little cameo was an unsurprising winner with fans. And, apart from reinforcing that stuff is always better with Chris Lee, it also sparked a surprising amount of speculation about Saruman’s intentions in desiring to confront Sauron alone."

When exactly did Saruman fall?

How to Debug Your Brain and Build Better Habits

Email ThisBlogThis!Share to TwitterShare to FacebookShare to Pinterest
Labels: Inspiration