"Songs" by Sima Kim is an utter delight 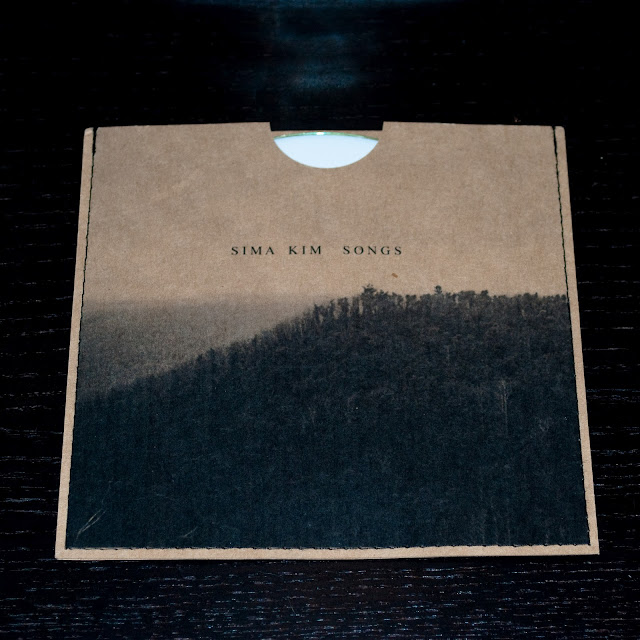 "Songs" by Sima Kim is an utter delight.

I could probably finish my review there… because, let's face it, I can't say anymore than that. I will, however, because that's what I do.

The release he spoke so highly of is the one I consider an utter delight - "Songs" by Sima Kim.

"Songs" consists of 4 tracks - two long form pieces by Kim himself… and two remixes from the awesome Bengalfuel and Darren Harper.

The two original tracks are simply divine. "I" is a languid, guitar-orientated drone that features repetitive female vocals that swirl hypnotically over and around the music. These vocals are not quite recognisable… which adds to the mystery… like a divine, Angelic language that my profane secular ears can't quite grasp to understand. The track builds to a delightful crescendo… complemented with some nicely distorted percussion which join the track and finish it off… like a bowl of ice-cream after a lavish meal.

"II" is similarly heavenly… with a catchy melody played on a what I think is a glockenspiel. This melody alone demonstrates Kim's musical prowess. The glock is underpinned by an atmospheric drone and some swirling sounds that dance in the imagination before being joined by some meaty post-rock percussion. I can't express how much I love this track. It is simply divine. It is the kind of ambient post-rock expression that I fell in love with all those years ago… especially when the female vocals enter the fray near the end. Vocals that are, this time, recognisable… but somehow still feel sacred and special.

Darren Harper's remix of "I" is a delicate reworking. The track starts off with the hum of a field recording and some chatter. He then brings a subtle drone to the fore… one that carries the track through to it's completion. It builds languidly… taking it's time… until more distorted drones join to complement the original, subtler drone. It builds and immerses the listener… bringing the guitar-orientated melody that makes the original track so distinct… so memorable.

Whereas Bengalfuel's 'cake fix' of "II" begins with a bombastic percussive rhythm… a banging, hypnotic, relentless rhythm that distances the remix from the original. Synths build upon this percussive motif… whipping the track into a Dervish-like whirling frenzy of sound, motion and feeling. An utter delight and a fitting end to what was an excellent release.

Sima Kim and Twice Removed Records should be very proud of this release… and I thank them for the opportunity to review it. I also greatly appreciate Catling's kindness in sending me a physical copy. The physicality of this artefact add something intangible (ironically) to this release… make it more precious, if that's possible?

All in… I would heartily recommend this release and hope it gets the recognition it deserves. I've embedded the Bandcamp player below to let you hear it... take time to listen and support great independent music.

Posted by weareallghosts at 8:47 am