“Ever After” by The Glass Hour 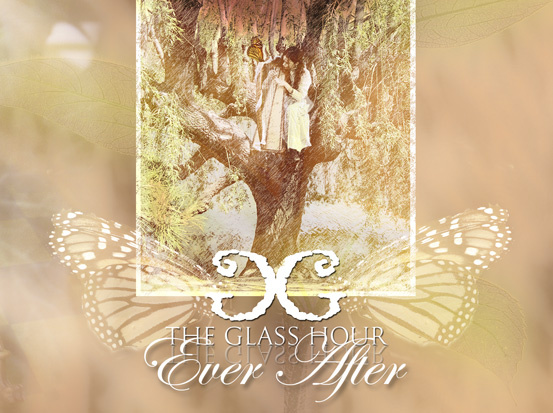 I was recently contacted by Tracey DeMarco, the vocalist and harpist from The Glass Hour, to see if I would consider reviewing their album “Ever After”. When she described the music she makes with Brian Bradbury (guitars, percussion, bass & keys) I was intrigued - I love the harp and think it is an under-utilised instrument ... either that or I don't have enough music with harps.

My initial reaction to “Ever After” was one of unfamiliarity ... not just because I didn't recognise the music but I didn't understand the manner in which the music was presented. I had a similar reaction when I first heard Dead Can Dance ... it's about their approach to music being different from that which surrounds us. And while this takes a small degree of acclimatisation, it does become The Glass Hour’s strength.

I don't tend to read the material that comes with a release ... I like to approach the music as naively as possible. If I had read up on The Glass Hour I would have noted them described as ...


This pretty much sums up The Glass Hour. Theirs is an otherworldly sound, a sound that transcends current trends and delivers something unique. There is a definite progressive bent to their sound ... seasoned by more traditional, folky flavours ... that means they wouldn't be out of place on the same bill as Blackmore’s Night or even the seminal folky progressives Iona. Whilst they may use differing patterns, they still cut from the same cloth.

Not all of their sound is to my taste ... some of the synths used do seem dated to my ears ... and the percussion can, at times, sound too produced and insufficiently organic to keep in line with the other more traditional elements ... but these personal dislikes are more than compensated for by the delightfully liberal use of the harp to carry the melody as well as keep time. It truly is a fascinating instrument and “Ever After” is a prime example of fine playing with tracks like “We Shall Breathe” demonstrating someone with skill as well as an elegance of expression.

DeMarco’s singing is also a pleasure to listen to. She has a folky voice ... a voice filled with passion and feeling. She entrances the listener ... captivates them with her skill ... singing in a more traditional way ... a way that is delightfully ethereal ... like, I imagine, a Siren of myth would sing

And it is when she sings that The Glass Hour are at their strongest ... “What Birds Believe”, for example, doesn't sit well with me because the emphasis has moved from her voice to a combination of synths and harp which, unfortunately, makes it sound like the theme to a late 90s computer game. This may be to some folks taste but it isn't to mine.

However, there is more than enough on “Ever After” to keep my engaged and interested. The opener - “A Faery’s Song” - is a tremendous opener that did make me think of Dead Can Dance. It has an Eastern element to it that, when combined with the vocals and the harp, make for a heady mix.

I also enjoyed the all-out progressive rock of the third track - “Lament”. The guitars stand out as being off-kilter from the remainder of the album ... but in a good way. I would love to hear more tracks that follow this style.

All in ... “Ever After” is a pleasure to listen to. It is something different and would be something different to most folks ... even for the most dedicated progressive folk rock fan ... that is unless they have a lot of harp music in their collection. It is in their other-worldly nature that their greatest strength lies ... and they successfully exploit it on this record.

I look forward to hearing more from DeMarco and Bradbury.

Posted by weareallghosts at 7:36 pm