Radiohead at the BBC 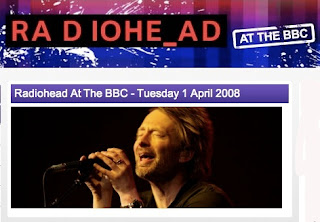 They also performed a matinee which will be broadcast on the 12th April (I think) - check the beeb for more details.

Radiohead have become an important band for me... ever since I downloaded In Rainbows last October. I find their music timeless and enthralling... kind of singing for me as well as to me... if that makes any sense?!? I also find their approach to music, their fans and life's big issues also remarkably refreshing and inspiring. Consider the webcast from Hogmanay 07... and now this concert. Both safely on my iPod thanks to some sweet software.

Thanks Radiohead... and thanks too to the Beeb - makes the license fee a worthwhile investment.
Posted by weareallghosts at 12:44 am

Thanks for the post, I tried for tickets (unsuccessfully!) so will have to make do with listening to it online. OK Computer was what got me into Radiohead.