a couple of camera apps for you...

I downloaded the Best Camera iPhone app today and I am mighty impressed... as the video above says... it allows you to shoot, edit and share within the one app. The filters are sweet - warm, cool, high saturation, light, dark etc... and the ability to add a frame or square the pic are nice touches within a really intuitive UI.

It truly is all about the stories rather than the megapixels... and the ability to share your pic there and then... to twitter... to facebook... via email... or to www.thebestcamera.com is very welcome indeed. That said... you can't add any commentary to your tweet which makes for a random, solitary link being posted in your timeline... such as "http://bestc.am/zbNjR"... but I feel this is something that can be developed in time with user feedback. I took the above pic with the ordinary iPhone 3g camera... then applied the "Bestcamera" warm filter for some added orange. I like the result and intend to do more with this app. 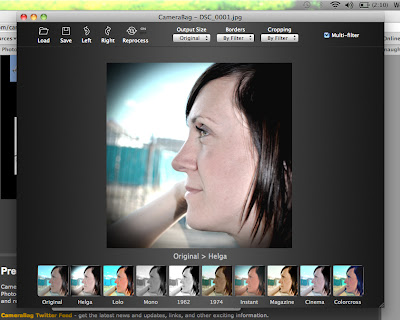 Next up is the camerabag desktop app... which is the desktop version of the fab iPhone app. It allows you to alter any pic on your Mac (sorry... its Mac only for now) using some great filters such as the "helga" which is remarkably similar to the output from a Lomo Holga or the "magazine" which has a great quality to it. It also has a really sweet UI... one that is easy to use for muppets like me.

The following pics were tweaked using the app: It does seem ironic to spend money on getting a fancy digital camera... then using filters to "cheapen" the image... but I like the aesthetic of film and whilst it may not be the same as shooting with actual film... I think camerabag does a really good job replicating it. It provides options for making your pics more interesting... and I like that.
What I don't like about the camerabag app is that there isn't a demo option... you can't try before you buy. That said, I would recommend it... if you like the output.

I downloaded the Best Camera app yesterday and have been playing with it. I like how you can 'rearrange' the filter stack and change the effect on the picture.

Thats a good point, Ian... it has a degree of flexibility that rocks imho.