Rick Warren may be factually correct... but 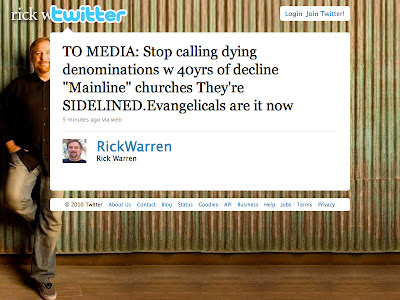 And... most importantly... I don't know what the "it" he is referring to is but I feel the context in which he is saying it is from within the Empire and not outwith.

I guess this is why I don't worry about labels and denominations... and if I did... I would consider myself "post-evangelical".

U*P*D*A*T*E
It would appear the comment has been deleted.

FURTHER U*P*D*A*T*E
I had a wonderful convo on my Facebook wall with my dear friends Jody and Roy on this subject. I thought I would add to the post.

I get the fact that Rick Warren is targeting his tweet at the media... and is basically saying "look... us Evangelicals aren't some leftfield movement anymore... we ARE the mainstream!" I get that.

I also get the fact he is, in doing so, challenging the media ignorance that comes with Christianity. I get that too.

I just think he could have done it better... to be honest.

I don't disagree with the sentiment of his tweet... I just think, in saying what he said in the manner he said it with the words he used... he could potential discourage folks... especially the folks who actually follow his tweets.

Whilst denominations maybe sidelined... people aren't. If they are then we are not following Jesus. Each and everyone of us has a circle of influence... each and EVERYONE of us! No one can sideline us. Our churches may be in decline but they are not dead... as long as we are alive and following Jesus. Where two or three are gathered... afterall.
What's more... the "Evangelical" movement is a pretty diverse group of people... as Roy pointed out:

"Evangelicals are comprised of a vast part of church- and it's not so much a wing as much as a wide array of believers that are part of every denomination and strand of the church. I know of Pentecostal Moravians; charismatic emergents; on-fire Spirit-filled baptists and Salvation Armyists. The old labels are dying off. If Warren tweeted this five years ago it would have made more sense. But then again Twitter did not exist way back then so people would wonder why the guy was writing in 140 characters."

I guess... at the end of the day... 140 characters is nowhere like enough to properly express concepts like the one Rick Warren tried to... he has tried and, imho, failed.
Tx

Not surprising he would delete the comment. A part of the reason mainline churches are declining is because people like him have made the worship service an entertainment, "me"-centric experience, and people respond to being entertained and catered to. With his continued bigotry against the LGBT community, I predict his own so-called evangelical movement will see decline. Then where will his triumphant crowing be?