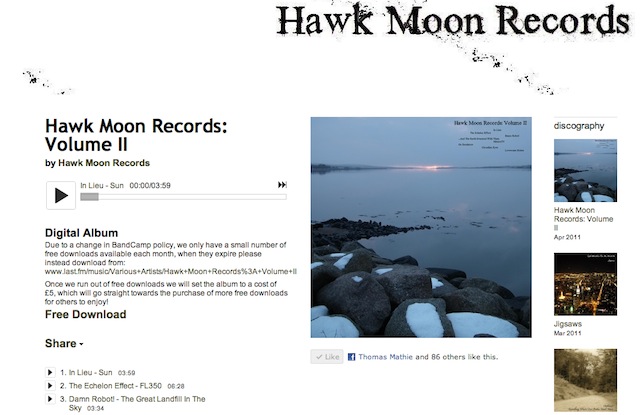 I have a confession to make.
I overuse the word awesome. I say it too often... and I think I have devalued the word.
Why my sudden remorse?
Well... I've been listening to the second Hawk Moon Records compilation and... well... its awesome!

It kicks off with "sun" by in lieu ... who are new to me but have seriously impressed me. Full on euphoric post rock with vocals reminiscent of Jon Anderson from Yes... albeit less wedgie-esque.

We then go into "FL350" by the wonderful Echelon Effect... who carries on his trademark deep wall-of-sound with a piece that incorporates American Police Radio (I think) and a tremendously languid melody.

Afterwards we have a piece from Damn Robot entitled "the great landfill in the sky"... which follows "FL350" with some French ranting (I think) over subtle beats and harmonies. Damn Robot is the new project from Rob (Inachus) Honey and Tom (Good Weather For An Airstrike) Honey... and I really look forward to their album in May. This track winks at real promise... albeit part of me wants to understand what the rant is all about.

From there we move to "the cure" by ...And The Earth Swarmed With Them which is beautiful in its graceful unhurried elegance and subtlety... very much the calm before the storm.

The storm coming in the shape of another favourite band of mine MinionTV with their track "Yardsticks". Their trademark post rock is combined with a frantic sense of urgency... and a building towards a chaotic climax... which comes in sound of skittering beats and an epic sounding wall of guitars. A track that needs volume... in fact it demands it!

We then come down a peg or two with "blood and toothpaste" by Escalators... before the rhythm becomes more frantic and the pace quickens again... with chunky guitars and a driving sense of movement. I'm really, really eager to hear more from them.

The penultimate track is fast becoming a favourite of mine... "the days of snow" by Circadian Eyes is melodious piano-driven post rock... that snares the listener and draws them in before building in pace towards a wonderfully joyful and euphoric moment of climax... a moment that holds a real sense of the cinematic.

The last track is by one of my all time favourite musicians... Lowercase Noises. "Let in the morning light" holds all the trademark elements that makes for a truly wonderful Lowercase Noises track :: a slower tempo... subtle melodious keys... skittering beats... and the most beautiful layered guitar sounds that build, evolve and mutate as the song grows. Truly gorgeous and warm-hearted.

All in... this compilation is awesome. The material on offer is truly the best out there... in my opinion. In fact, this compilation would make a mighty fine soundtrack to a Hollywood film.
Yes, its that good.

Oh and the craziest of things is that the compilation is free to download here.

As my twitter friend @textistential put it... "Holy cow. WHY IS THIS FREE?".

Tx
Posted by weareallghosts at 10:44 pm