Last night I had the opportunity to spend a few hours in Auld Reekie aka Edinburgh courtesy of Shona Maguire aka Plum (pictured above). She had invited me to join her and about one hundred or so others at the Electric Circus, near Waverley Station.

I left early... I had an errand to run for Olly that took me to a village called Climpy... yes that's what it's called... and I also grabbed the opportunity to meet with my old friend Robert.

After grabbing a coffee, I headed to venue. Unfortunately I missed young Megan D... an aspiring solo singer-songwriter-with-acoustic-guitar... the crowd were warm to her and I need to find her music... at sixteen she has so much potential. Next up were Capitals... a two-piece electronic band based in Edinburgh that I really loved. Angus Carbarns and Keir MacCulloch really work well together... and their sound was very now. I initially thought New Order but I'd take that back... more Friendly Fires... guitars and vocals over some tight electro grooves. I'm going to make the effort to see them again. After a brief wait where the sound engineer valiantly got all the kit ready... Plum took to the stage... with a backing singer whose name I missed (sorry) and Keir MacCulloch... who was involved in the album. The set was fab... with the songs from The Seed sounding fantastic in the live setting. Shona's expertise as a musician shone through... but what really got me was her warmth and, at times, patience with the audience.

I don't mind getting a pint spilt down me nor do I mind getting whipped in the face by a flying dreadlock when someone is dancing... I do, however, mind folks talking when the main act is performing. This is unacceptable and no way for a fan to behave... in my opinion. Having to ask the audience to be quiet whilst she prepared the loops for Different Skin was ridiculous... but Shona handled it in such a warm and gracious manner. I personally haven't seen such technique with a looping peddle since I saw Feist support Phoenix in King Tut's a good few years ago. She knows how to loop and to pull Different Skin... the only track not on The Seed... from vocal loops just astounds me. All in... it was a great gig... with the highlight being the opening track from the album... also called The Seed. What made it more enjoyable was the banter before it where Shona claimed she wasn't a bassist... my goodness... if she's not a bassist then I'd like to hear her play an instrument she identifies with... she was fab.

That said... I did enjoy the encore too. Smile is such an infectious track... wonderfully upbeat... made more so by Shona's request to get everyone "claw dancing". It was one of those ridiculously silly moments that make life wonderful. 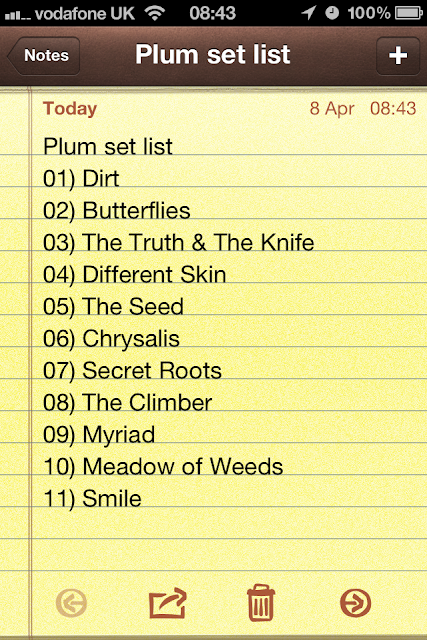 My sincere thanks to Shona for inviting me to the launch. I had a great time. I would highly recommend both her album and catching her live... I know I will again and will happily pay next time.

Posted by weareallghosts at 8:52 am