Loving... "buy both and feel deceived" by Toaster 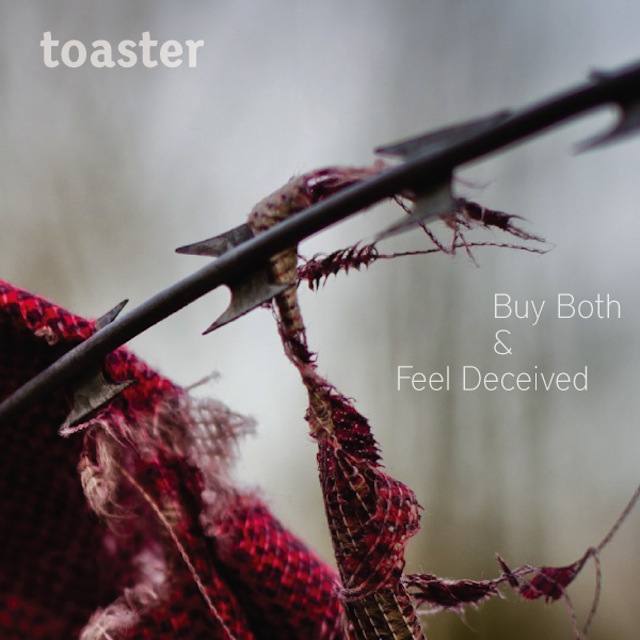 If I were to provide a list of adjectives that I like in my music, I would say... immersive... emotive... stirring... engaging... and quirky.

I love quirky music. It's an adjective that doesn’t get used often to describe the music I hear... in part because I don't get the chance to listen to the more abstract ”out there” experimental music that I used to. I also think great quality unique abstract electronic music isn’t as easy to find as it was in the days of Earth Monkey Productions, for example... or maybe that's just me?

That said, quirky is an apt description for the wonderful album by Toaster entitled ”buy both and feel deceived”... recently released on the fantastic Invisible Agent netlabel (I should say re-released as it is a coming-together of two previously self-released EPs along with two additional tracks). The unique nature and approach of Todd aka Toaster comes shining through on this release... the soundscapes presented easily identifiable as originating from him... from his worldview.

However quirky is only the tip of the iceberg... and if I was to just call this album quirky it would mean a disservice to Todd and my taking the easy route towards convenient over-simplification. It's far more than just quirky. ”buy both and feel deceived” is deeply engaging with immersive ambient soundscapes that provide space to ponder... as well as robustly ”out there” upbeat abstract electronic moments that raise the pulse and inspire me with their rejection of inertia and the status quo.

Take ”Panties” for example... it's hard not to think of Aphex Twin or Orbital when listening to this track... and yet it is distinctly Toaster too. It is wonderfully abstract, quirky and ”out there” electronic music... something that fits the headphones but deserves a large sound system. ”Speaker’s Valise” and ”Drunk, Walk to Lake” are similarly expressive in this manner... constrained somewhat by headphones... yearning for the wide expanse of a decent, loud sound system (a sound system I can not have due to living in a semi-detached house with neighbours who have small children).

And yet Toaster can really deliver an ambient soundscape too... ”Vacations”, for example, is deeply Ballardian and reminiscent of Cousin Silas’ earlier work. Extremely atmospheric and downright creepy at times... I love it.

My favourite track is ”I think everyone has gone” which seems to blend both elements into a marvellous soundscape... that is both deeply immersive and expertly layered... presenting sounds that both calm and intrigue.

I would highly recommend this album to anyone with a fondness for unique, expressive electronic music. Some tracks may not be easily and instantly accessible... but music isn’t always about easy... you want easy, watch ”the x-factor”... if you want music that inspires and stirs the soul then you may have to work for it... and if you are prepared to... I hope you find music like Toaster’s ”buy both and feel deceived” as rewarding as I have.

Posted by weareallghosts at 9:35 am