Why I love the Regarding Henry OST 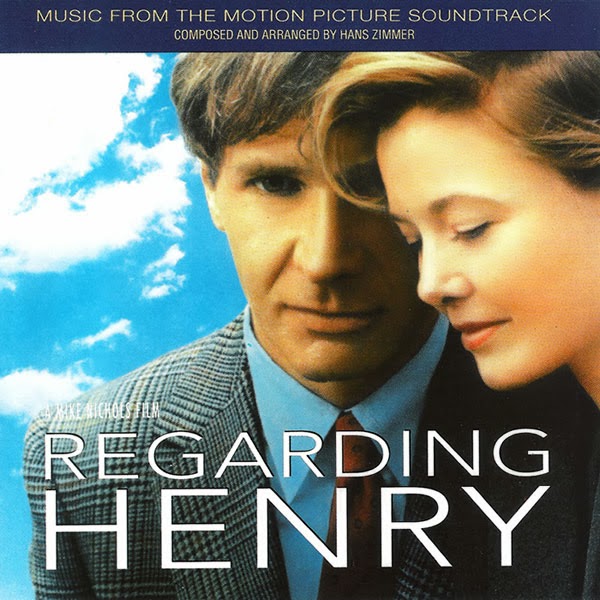 I recently obtained the "Regarding Henry" soundtrack via a friend in the States. I have been searching for it for ages but it is out of print and ridiculously expensive in the UK. I was able to help my friend out with a UK-only purchase & he returned the favour, something I am extremely grateful for.

I wanted this CD for three reasons:

2) Olly & I share a love of this utterly beautiful music ... and we don't often share the same music.

3) I bought the album on cassette in the early 90s and have such a warm regard for the album as a result of the memories associated with it.

Back in the early 90s I was a voracious music fan ... I listened to a ton of music. This was pre-internet so this music came from a number of physical sources: my own purchases, gifts, borrowing from friends, and borrowing from the local library. I would give anything a listen & was the worst friend for borrowing a CD or tape & then sheepishly returning it 3/6 months later. Yes, I was *that* guy.

What I was very fond of doing was raiding bargain-bins. I found a whole host of great music in bargain-bins. I wasn't bothered about following trends and, as such, these bins were ideal for me. Nothing was off limits except for cheesy pop: metal, disco, synth, acid jazz, dub reggae and soundtracks ... especially soundtracks.

I would pick up an album for a couple of quid & listen to it obsessively ... over & over & over again.

It was around this time that my love of instrumental music developed, partly as a backing to my studies - music helps me find my flow & soundtracks were particularly effective in this regard ... they still are.

I found the "Regarding Henry OST" in the reduced section of Our Price in Hamilton in 1992. I may have paid less than £1 for it on cassette.

I had no expectations for the music. I hadn't seen the film and didn't know what to expect musically ... I wasn't as familiar with Han Zimmer’s music as I am now.

I had a hunch it would be good but didn't know. I was not disappointed. In fact, I'd go so far as rate this album in my top ten fave albums of all time ... along with the likes of "Pet Sounds", "Takk", and the "Bladerunner OST".

Zimmer's soundtrack to "Regarding Henry" is 39 minutes of sheer joy ... enhanced by the jazzy vocal nonsense of Bobby McFerrin. This is what Heaven sounds like to me: keys, synths, percussion, some strings and some beautiful bass guitar, and one of the coolest men ever going "doobie-doooo-dah" every-so-often.

I purchased this album in the early days of my relationship with Olly ... and have a warm, fuzzy memory of it. I don't think we’ve seen the film more than a couple of times (it's a good film) ... but, for us, it wasn't about the film ... it was as if Zimmer had soundtracked our lives: I was the "walkin’ talkin’ man" and when we got together it was as if we were in "the Ritz". Silly, I know, but great music does that to you ... and keeps doing it to you!

I haven't listened to this album properly since before Miriam was born ... and yet the feelings I associate with it are still as fresh as they were back in the day. This is the power of music!

So when folks like Thom Yorke complain about Spotify devaluing music ... this is a little bit of what he means. I don't know that people have the same value for music as they did ... maybe I'm wrong (trust me, it happens) but ownership along with ’the hunt’ and the serendipitous moment of discovery all come together to make something beautiful indeed. You owned the music in more ways that actually ’physically’ owning an LP, CD or cassette ... it became part of your narrative.

I love this soundtrack & am grateful to my friend for obtaining it for me. I truly hope you hold an album with such high regard as I do Hans Zimmer's "Regarding Henry OST".

Tx
Posted by weareallghosts at 10:44 pm