Loving ... "A good land, an excellent land" by Tiny Leaves 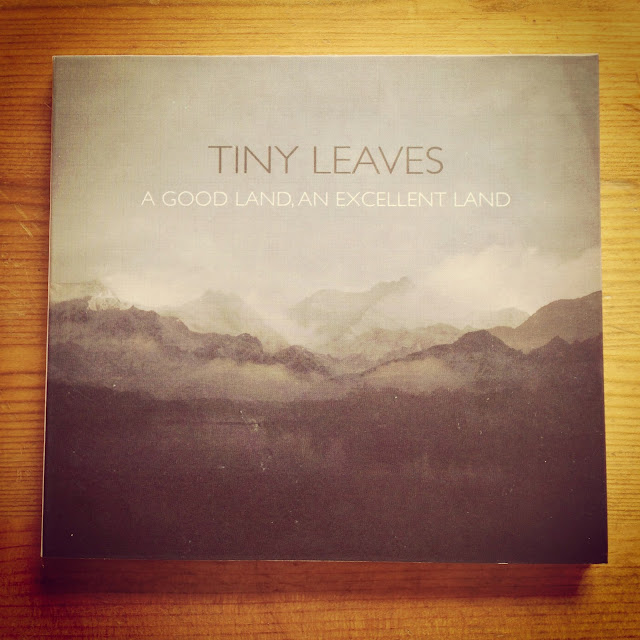 I'm not entirely sure what prompted me but I picked up "a good land, an excellent land" by Tiny Leaves ... I realised that I didn't have it and wanted to hear it. I had the album on my iPhone thanks to my Rdio subscription and it was one of the few albums I missed when I killed my sub.

I did a Seven Questions with Joel Pike aka Tiny Leaves last year (link) but never followed it up with some thoughts on the album ... so I thought I would after Pike kindly upgraded my purchase to include the CD as well as the download (thanks Joel!)

"a good land, an excellent land" by Tiny Leaves features some exemplary neo classical soundscapes ... with Pike playing piano and guitar on all 8 tracks, Susie Shaw playing cello on 5 out of the 8 tracks, Marianne Windham playing double bass on 3 tracks and Rob Wilson playing violin on 4 tracks. Shaw's cello is particularly haunting ... as Mark Wardale mentioned to me this morning when commenting on the above photo in my Facebook feed.

I would go so far as to say the whole album is haunting ... certainly in the way that it stays with you long after it has stopped playing.

It opens with 'beginning' ... an atonal droning introduction that subtly shifts into chords from all four players. It is a marvellous start to the album ... that moves to a piano, cello and violin track entitled 'speaking of things as yet unseen' ... an elegant track with the most exquisite of melodies, one that lightly dances upon the listener's conscious and entices them to listen like a Siren of old.

From here we move to 'my hand in yours' where Pike goes it alone ... just him and his guitar at the start - a remarkable slice of ambience ... with layered guitars and reverb - before Pike's piano melodies come in to liven the mood.

'Weight / Wait' - the 4th track - is an altogether more rambunctious affair and pleasantly so ... it is a track that brings all four players together again to create a rather joyous expression with a refrain played on the cello and mirrored on the violin. It changes into a more reflective piece about half way in ... which shows the talent and restrain of Pike as a composer as well as a player.

'Minuet' is a delightful cello and piano piece with hints of guitar in the background ... the rivalry between the cello and piano for supremacy is a delight to observe, they toy with each other for the uppermost place and, in doing so, work together to make the track come alive.

From there we then slide into 'Abraham' ... a gorgeous piano-only piece that is simply alive with feeling. Watch this to see what I mean:

The penultimate track - 'a good land, an excellent land' - brings the team back together for one final joyous outing ... and what an outing it is. A bright, vibrant, upbeat piece ... full of life and energy. It has an almost folky refrain coursing through it's veins from the violin that is foot-tappingly exciting. As is Pike's want, the train changes around the 1:45m mark to become more introspect and restrained. This is both disappointing and a delight ... but, knowing Pike, nothing happens by chance and as the violin and cello begin to accompany the piano, you know the energy is still there. This track is an utter delight and a worthy holder of the album's name.

The final track - 'leaving' - is a sombre affair ... just Pike, his piano and the space between the notes. It is an eloquent ending to the album.

"a good land, an excellent land" by Tiny Leaves is an exceptional neo classical expression from an exceptional musical talent, one I would highly recommend. Have a listen below and do what you can to support independent music.


Posted by weareallghosts at 5:18 pm