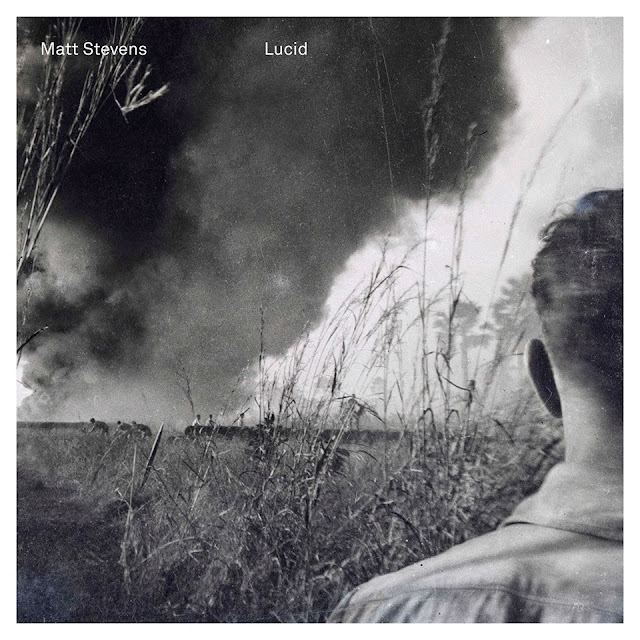 Monday saw the launch of Matt Stevens latest solo album - "Lucid". I've been privileged to have a copy for a wee while now and am amazed at the creative expression that is presented therein.

"Lucid" IS a Matt Stevens record. It features his trademark weird timings & polyrhythms, multiple layers of guitar-based sound, and his delightful "what comes next?" presentation that keeps me on  my toes as a listener and a fan. It is a wonderfully inventive, progressive, boundary-pushing example of a creative guitarist who just gets stronger with each release, either on his own or with his fantastic band - The Fierce & The Dead.

But for all their additions, "Lucid" remains a Matt Stevens album. There is nothing quite like it and I, for one, love that about this & his other releases.

"Lucid" is a rollercoaster of a musical ride ... one minute you are on the up, the next you are banking hard at a 90 degree angle going round the bend ... hard, caustic guitar one minute, beautifully elegant acoustic guitar the next. I love it and after 42 minute duration of "Lucid" I was strangely satisfied. I attribute this to Stevens’ ability to combine multiple ideas into a single track & ensure all these ideas work together. This is his skill.

From the mid-paced, methodical rock of the opening track - ’Oxymoron’ - to the delightful acoustic sounds of ’A Boy’ ... "Lucid" doesn't fail to delight. It is packed with the kind of innovation that is so easy to soak up. Stevens’ inventiveness isn't off-putting either ... "Lucid" is an easily accessible album for newbies as well as long-time fans, which is down to Stevens as a person as much as it is down to the music he creates. There is a genuine warmth that shines through all Stevens does.

It seems unfair to pick out key tracks as the whole album does ... as a whole ... stand out. However, at a push, I would bring your attention to  ’The Other Side’ with the jaunty interplay between Stevens’ guitar & the pipa (played by Charlie Cawood) ... and the progressive epic ’The Bridge’ with its big guitar sound, Caulfield's violin, pounding percussion from Marshall & Feazey and a heartbreakingly poignant solo guitar.

Matt Stevens makes the extraordinary sound everyday and the challenge for him will be to maintain this momentum & keep creating such exception soundscapes. I know he is more than capable of this & look forward to "Lucid" solidifying in my conscious as a highlight of 2014.

Before I go, it would be amiss of me not to mention Carl Glover's excellent cover. It's the kind of cover you can stare at for a long time.

Have a listen to 'The Bridge' below & if you like what you hear please support this exceptional British artist so he can continue to make exceptional independent music.

"Lucid" was released on the 31st March and is now available to buy from Burning Shed and Cherry Red ... iTunes too. Sadly no Bandcamp, however.

Posted by weareallghosts at 8:25 pm