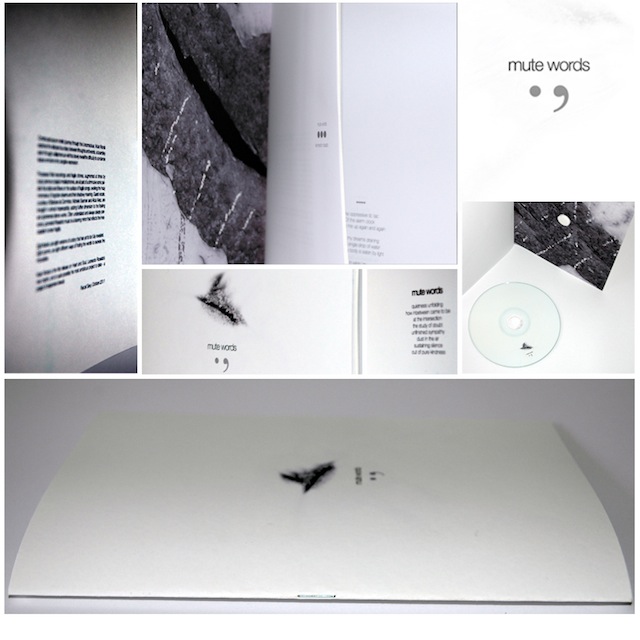 Next level. This is the only phrase that does justice to the new recording from one of my favourite ambient musicians.

"Mute Words" is quite simply next level in terms of structure and approach. The tracks demonstrate a tangible progression and evolution in Rosado as a musician and they way he is approaching their physical distribution through Heart and Soul (the sister label to FeedbackLoop which specialises in handmade objects) demonstrates a real growth as an independent artist.

The tracks are richly detailed and immersive... inviting in their initial presentation and engaging in the manner that they keep a listener's attention with multiple layers of complexity.

As the final notes from "out of pure kindness" drift off into memory I feel both fed and hungry. It is this paradox of the initially accessible and the deeply rewarding that I find fascinating... a fascination that has kept me content with what I have whilst being thirsty for more.

Rosado has truly developed as an artist. The layers of drones he uses are complemented by wonderful found-sounds, field recordings and a piano to build a real richness of sound... to which he adds, in just the right places, three very unique and individual vocal contributions to create the most glorious of ambient soundscapes.

Is it ambient because he has utilised the talents of two singers and a spoke-word poet..? Absolutely. For me ambient is not really about the absence of words but more about the presentation of feeling, mood and expression... for me it is the ambience that counts.

Take the poetry of Michelle Seaman to accompaniment of Rosado's drones, clicks and percussive field recordings on the track "the study of doubt". Whilst her style reminds me in part of the nu-soul poet Dana Bryant... her vocals also remind me of something futuristic... almost robotic. I can't imagine any better execution or collaboration than what is presented to me here. It just sounds so right & complementary... the soundscapes created and the feeling expressed both verbally and sonically is just breathtaking.

I get a similar feeling when I listen to Barbara de Dominicis ("how inbetween became to be") and Alicia Merz ("out of pure kindness") both uniquely individualistic but complementary when you listen to the album as a whole.

I would love to hear more from all three vocalist. I know Rosado has collaborated with Merz on Birds of Passage. I remember lapping up the track they submitted to the "Sequence1" album. It was an exemplary track in an already extremely high quality compilation.

I won't go into detail about each track because I don't think that's fair for you... potential listeners... but I will say this: Rosado is a leading figure in ambient music & this album cements his status. It is truly magnificent and will, without doubt, top some lists for best album of 2011.

I am grateful to Leonardo Rosado for giving me a preview copy of the album. It drops in early December with a limited number of physical copies being produced. I have embedded the bandcamp player to let you hear it. Please do what you can to support independent music.


Posted by weareallghosts at 9:33 am