Machines for the New Dawn... an interview with Adam Greenhead pt1 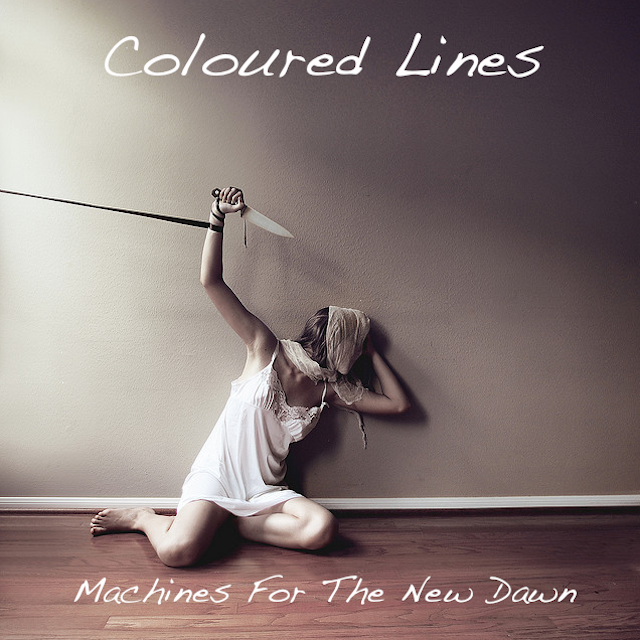 My friend Adam Greenhead aka Coloured Lines has released a fantastic album entitled "Machines for the New Dawn" which is a wonderful mix of vocal samples, chunky beats, strong melodies and some great vocals.

It's not my usual style... it isn't ambient nor is it post-rock... it has a impressive sample-driven new wave vibe about it that I just love... and with Adam's melancholic falsetto... it makes for a wonderfully deep and entertaining experience.

Rather than just post a review... I thought I'd take some time out with Adam and ask him about the album. ... and was impressed with the answers he responded with. I've cut the interview in two... with the second post coming tomorrow evening.

AG) The field recording used in the opening of the album is actually a sample that I found and decided to use. Unfortunately, I was not able to make a field recording myself due to equipment restrictions so decided to use a sample. The particular sample I used is from New York City and I feel adds a sense of space and ambience to the song that otherwise wouldn't be there. I got the idea from a few different sources. As most people know I'm a big fan of minimalism and the idea I think subconsciously came from Reich's 'City Life'. During the course of my degree I had quite a few lecturers who were into avant garde music such as electro-acoustic music where they often used field recordings. I took some ideas from them, but not being a massive fan of electro-acoustic music I decided to do my own thing with the sample.

TM) on "love lost light part 1" there is a sample that talks of " Dave" ... my assumption is that this is David Cameron, our current PM ... how has our current political environment shaped this album?

AG) Ha ha you are indeed correct. I came across this sample on the internet of Samantha Cameron talking about her husband. It made me laugh to find that she actually called him 'Dave' and so I decided to use it as it shows there is a different perspective of him from someone else's view. During the second year of my degree we had our general election and I began to get quite involved with it, watching the debates on TV when one day my then local MP, Greg Mulholland, knocked on our front door. I spoke with him about student fees and he said he was opposed to fees etc. After that election it is well known that the promises made by the Liberal Democrats were broken and having voted for them I felt stabbed in the back. As time went on various global political movements took place, such as those in Tunisia and Egypt and I was writing this album thinking wow, this is so relevant to how the world is responding to all the different troubles that are happening. Domestically, I have been furious with the current governments cuts to the arts and everything else they can lay their hands on. People who control our government have no clue how ordinary people like you and I live, or how we try our best to get by as prices rise and bankers risk our money for fun. I realised that I was becoming a very angry person with society so I channeled that through this album.

TM) Furthermore... you demonstrate an adeptness in picking really great vocal samples. Throughout the album we have some wondrous vocal samples from Margaret Thatcher, Tony Blair, Gordon Brown, the current US President, Barack Obama, and even Charlton Heston. How do you decide on what makes a great sample?

AG) I came across the Margaret Thatcher sample first in the very early stages of the title song, which happened to be the first song on the album I wrote. I was listening to an old party conference of the Conservatives when I heard Thatcher say 'we believe everyone has the right to be unequal'. The speech carries on after she said this but I managed to extract that sample and in the context of what she was saying, change the meaning. My Dad is a big Thatcher era hater and as a child would often go on about his dislike of her. The society we live in is also very unequal, no matter how hard we try to hide it and something clicked and made me think it would be a great sample to use - mainly because she was such an iconic figure for good or bad. Deciding on samples is hard and took a long time to find the right ones and then to see if they will fit to the song you're writing. I spent hours looking for and manipulating them to the point of bordem almost. I'd say a sample depends on what you're trying to create with the material - for instance I like using odd titles for my songs and often start with the title and then build the context around that. For this album I did that by using samples.

TM) You took a gamble and asked your fans (myself included) to prepay for the album ... what are your thoughts on this gamble and would you recommend this path for other upcoming musicians? When will I get my CD and, more importantly, where are the socks I was promised?

AG) Making the pre-order was a huge gamble, not only for my fans but also for myself financially. I have always wanted to put my own album in production and have something physical in my hand at the end of the long recording process (I'm a big lover of CDS!) I couldn't afford to do this to begin with so I decided that I'd try the pre-order on Bandcamp and see what response I got. It has been really positive and with the help of my fans I've managed to make those CDs, there was a demand there and I'm thrilled I've been able to accomplish making my own CD! If other upcoming musicians think they have a fan base big enough to cater for physical releases then I would encourage them to do so. It is very motivating knowing that your fans have faith in you by order a pre-order before they know the final outcome of your work. I am waiting on my suppliers to deliver the CDs this week (there were a few production hiccups) which means everyone should receive their copy by next week, maybe even earlier. I am also offering a FREE BONUS CD with the album orders so it's worth fans getting a hard copy of the album. Also someone asked for some dirty underwear with their CD so I've catered for that too! ;)

Machines for the New Dawn is available now from Bandcamp. The album can be downloaded for free or  a physical copy on CD can be purchased for £4. A Limited Edition USB with .wav files and CD Digipack is also available for £12.

Have a listen below... and come back tomorrow for the second part of this interview.

Posted by weareallghosts at 9:00 pm