I love stories... and found a couple of interesting links: 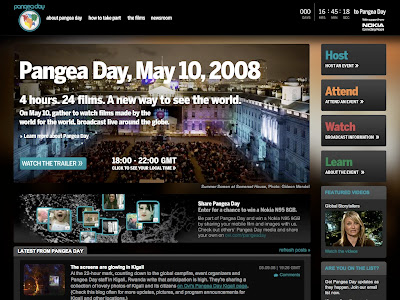 First off we have Pangea Day > its scheduled for 1800hrs GMT tomorrow [10th May 08] with contributions from all over the world. So what's it all about?

Pangea Day is a global event bringing the world together through film.

Why? In a world where people are often divided by borders, difference, and conflict, it's easy to lose sight of what we all have in common. Pangea Day seeks to overcome that – to help people see themselves in others – through the power of film.

Starting at 18:00 GMT on May 10, 2008, locations in Cairo, Kigali, London, Los Angeles, Mumbai, and Rio de Janeiro will be linked for a live program of powerful films, live music, and visionary speakers. The entire program will be broadcast – in seven languages – to millions of people worldwide through the internet, television, and mobile phones.

The 24 short films to be featured have been selected from an international competition that generated more than 2,500 submissions from over one hundred countries. The films were chosen based on their ability to inspire, transform, and allow us see the world through another person's eyes.

The program will also include a number of exceptional speakers and musical performers. Queen Noor of Jordan, CNN's Christiane Amanpour, musician/activist Bob Geldof, and Iranian rock phenom Hypernova are among those taking part.

I'm going to check it tomorrow night (its on Current TV, Sky Movies :: Indie and online) and I am inspired by how stories can connect and unite people.

If you consider the building blocks of life :: education... faith... experience... culture... science... relationships & family... :: they all revolve around stories as a means of communicating shared norms and values. I wonder what the common themes and messages will be... and welcome the concept. There is a definite need for the sharing of a global message... one that isn't controlled by unaccountable corporations or brands... but by people for people. 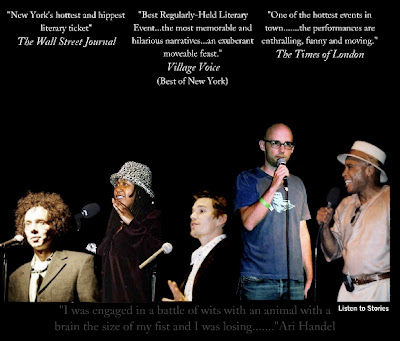 I subscribe to the Moth's podcast [I have never had the opportunity to visit the club in NYC (its held on a week night)] and some of the stories told are hysterical! Not for the faint of heart - they contain bad words but thats because they are heartfelt and real... and, more importantly for the listener, very funny stories from the experiences of the storytellers - the way good stories should be.

The Moth, a not-for-profit storytelling organization, was founded in New York in 1997 by poet and novelist George Dawes Green, who wanted to recreate in New York the feeling of sultry summer evenings on his native St. Simon's Island, Georgia, where he and a small circle of friends would gather to spin spellbinding tales on his friend Wanda's porch. After moving to New York, George missed the sense of connection he had felt sharing stories with his friends back home, and he decided to invite a few friends over to his New York apartment to tell and hear stories. Thus the first "Moth" evening took place in his living room. Word of these captivating story nights quickly spread, and The Moth moved to bigger venues in New York. Today, The Moth conducts six ongoing programs and has brought more than 2,000 live stories to over 60,000 audience members.

My personal favourite is from Malcolm Gladwell... who recalls the time he started in journalism and competed with a colleague to insert phrases into the news. Had me crying on the train home one night recently. Well worth the 15mins or so per pod.

Check them out.
Posted by weareallghosts at 9:26 pm

Unrelated to the post, but hey, that's life! On way to bed, checked your blog. Thought I'd take a moment to check in and stop by, to wink and say hi. There with you bro, today and tomrrow.