This is cool :: Radiohead - not for profit 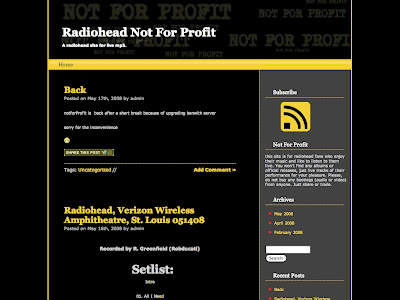 Huge thanks to Darrin for the heads up on the fantastic Radiohead - not for profit website. Basically its a place where you can download bootleg recordings of Radiohead gigs. Here's the skinny ::

this site is for radiohead fans who enjoy their music and like to listen to them live. You won't find any albums or official releases, just live tracks of their performance for your pleasure. Please, do not buy any bootlegs (audio or video) from anyone.

Works for me... although I am not sure what the band will think of this.

Personally I think it is a very pro-fans kind of thing. I don't buy bootlegs... the quality isn't always that great... and I see this as a great way to kill the market for bootlegs - give them away.

Thing is... this is very much an add-on... an extra... the icing on the cake! I will not stop listening to the Radiohead albums I have bought... nor will it ever stop me from going to see them live (I haven't seen them live yet... but intend to someday).

This doesn't devalue their music... but makes it more valuable. It provides new takes on familiar songs... distills the temporary excitement of the unfamiliar... encapsulates the very essence of the live experience, even though it is still the lousy second to actually being there.

What devalues music is artists like Sir Paul McCartney giving away his album "Memory Almost Full" for free in "the Mail on Sunday" (thanks Rob) - you could argue he is giving back... but is he really? Its a platinum seller already. This is just a gimmick to create a buzz... and in doing so... his music is relegated to the status of "free" in the minds of everyone who hears of the promotion.

If you want to encourage people to value your music then make good music... and build a good reputation with your fan base. Celebrate the fans you have instead of always chasing the new. Give them something for free, sure, but give them something they will treasure... something different or something unique. Not the same album that they have already paid for!

Let's face it... the Mail on Sunday buying demographic will seriously overlap the McCartney fan base demographic... afterall ::

it's no surprise that Britain's number one artist should choose the nation's favourite Sunday newspaper, the Mail On Sunday, to give away his latest platinum-selling album, Memory Almost Full.

Bands like Radiohead with their webcast on Hogmanay, their doomed free gig at Rough Trade, fab concerts for BBC Radio and their approval for Amplive's remixes; and Nine Inch Nails with their direct distribution and free content (The Slip - their latest totally free album is fab) are doing far more to encourage fan loyalty and the appreciation of their music than the record companies ever could. The irony is that neither of them have a record company. Hmmm...
Posted by weareallghosts at 10:48 pm