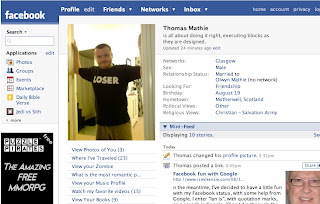 Been thinking about Facebook recently... I spend way too much time on it... but get so much from it. Keeping in touch with Adele in the US... Pernell in Canada... Roy, Johnny and Lloyd in London... Nuno in Portugal... as well as all my friends in Scotland.

Noah Brier (a blogger I respect as an authority on social networking and a friend on Facebook) recently asked a question...

Personally I like it. As discussed above... it keeps me in touch with my pals in a way email or the blog doesn't. Its two way... almost immediate... and friendly. Sure it is addictive... but its fun.

I love the group functionality... Olly and I recently created a group to show our love for the choir leader at Summer School '07 :: The Ann Howlett-Foster Appreciation Society. This was in response to Andrew Blyth (the "A" Bandmaster) having his own Appreciation Society. As I said... Fun.

There are other ways to have fun on Facebook - Ian McKenzie suggests you try a google-game... Type in "[your first name] is" into google and choose some random result for your status. Mine is presently...

Thomas is all about doing it right, executing blocks as they are designed.

What I don't like about Facebook is the closed nature of it. Most of the grown-up kids I know are on Facebook... where as the younger folk I know are mostly on Bebo or MySpace. I hate the fact I can't access their pages without a Bebo account and can't comment if I don't have a MySpace page.

Social networking is about openness... not closed communities. I'm not alone in this thought... Internet law professor Michael Geist says, in an article on the BBC News website, that the walled gardens of social networks should be pulled down. He makes a good point...

But I want Facebook to be open. If I wanted a closed network... I would have joined Holypal which describes itself as a...

Why??? What is wrong with Christians who only want to surround themselves with Christians? In the world, people... salt and light!!! As I have said before... reject ghettos in all forms!

Another thing I hate... or at least dislike... is the childish nature of some of the apps. Sometimes its too much. Just like the notifications... my gmail has gone nuts with all the invites for silly apps. Facebook is more than this... and we need to protect it with a wee bit of restraint.

Anyway... rant over... I'll leave you with a comment from my pal Johnny:

...still prefer blogging to Facebook for the deeper stuff, and Facebook to hook up with all my non-bloggin' buddies

Makes sense to me. I'll keep on bloggin'... just maybe not as often as I used to.

If you are on Facebook... hook up with me. If you are not... what are you waiting for?

Posted by weareallghosts at 10:07 pm

i LOVE Facebook and think it's WAY COOLER & BETTER than myspace! IT IS ADDICTING!!!!!!!