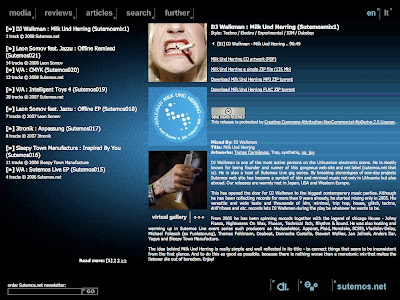 One of my fave netlabels :: Sutemos :: have released their first mix... its from their head honcho DJ Walkman and its looks fab - haven't heard it yet but the blurb speaks to me...

DJ Walkman is one of the most active persons on the Lithuanian electronic scene. He is mostly known for being founder and runner of this gorgeous web site and net label (sutemos.net that is). He is also a host of Sutemos Live gig series. By breaking stereotypes of one-day projects Sutemos web site has become a symbol of idm and minimal music not only in Lithuania but also abroad. Our releases are warmly met in Japan, USA and Western Europe../

../The idea behind Milk Und Herring is really simple and well reflected in its title - to connect things that seem to be inconsistent from the first glance. And to do this as good as possible. because there is nothing worse than a monotonic mix that makes the listener die out of boredom.

Can't wait to dig in. Check it out.
Posted by weareallghosts at 9:34 pm

thanks for the Sutemos tip. i spent about an hour or so just listening through some of the mixes and downloaded the entire intelligent toys sampler. some good tunes in there.