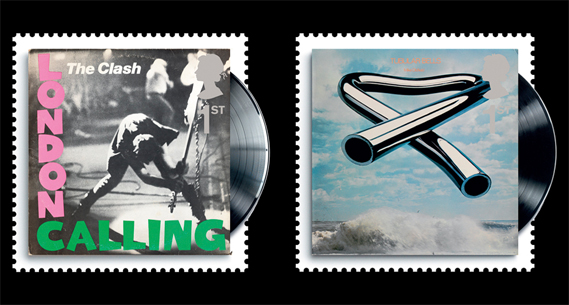 According to Creative Review... the Royal Mail are releasing 10 stamps in the new year that showcase some of the best British album covers... and I for one can't wait.

Included on the list are The Clash, Mike Oldfield, Blur, the Rolling Stones, and New Order... a fair representation of what Britain has to offer. I'll need to find a wee space for them alongside the British Design Classics that I picked up earlier in the year.
Personally, I like the details that CR discuss...

Deciding what album covers to include was no easy task. Royal Mail tell us that they began the process by trawling through various existing polls of Greatest Album Covers. They also enlisted the help of editors from various leading UK music publications along with graphic designers and design writers who were asked to list the most significant album sleeve artwork used on records by British artists. The final selection of ten sleeves (which perhaps oddly doesn't feature one of The Beatles' album covers) will appear on a set of 10 stamps that will launch on January 7, 2010 - and the stamps will be uniquely shaped, as shown in these images, to accommodate a glimpse of a vinyl disc poking out of each record sleeve.

...but then I'm a geek who likes album covers and really well designed stamps... so yeah, I'm happy... and will be queuing up on the 7th January.
Got to Creative Review to see the rest of the stamps.