Found more awesome music on bandcamp that I wanted to share... 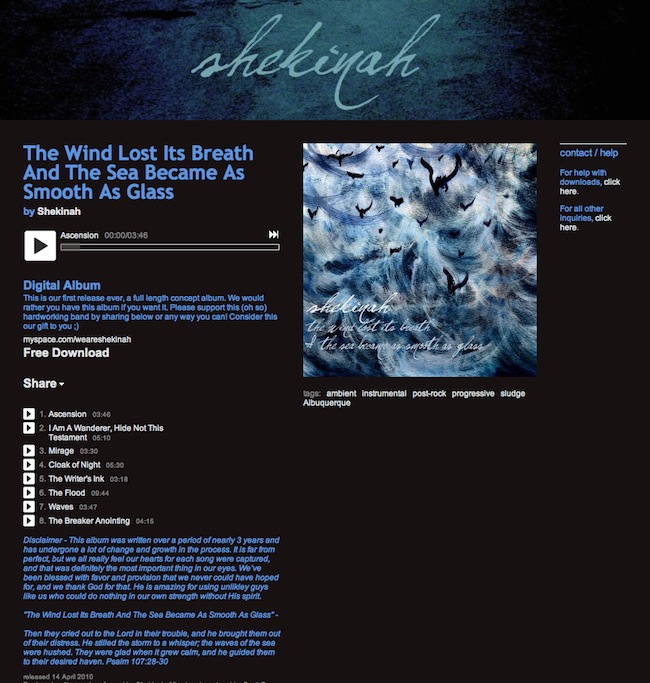 First up... we have some fantastic instrumental guitar-orientated post-rock from Albuquerque, New Mexico; from a band called shekinah. Their album - "the wind lost its breath and the sea became as smooth as glass" - is wonderfully paced with a real sense of depth. Quoting Psalm 107 really added to this, for me.

This is instrumental music at its best... evocative, intriguing, spacious and rewarding. It doesn't demand the listener to listen... but yet encourages them to come back for more... which is something I am doing a lot of and will continue to do. 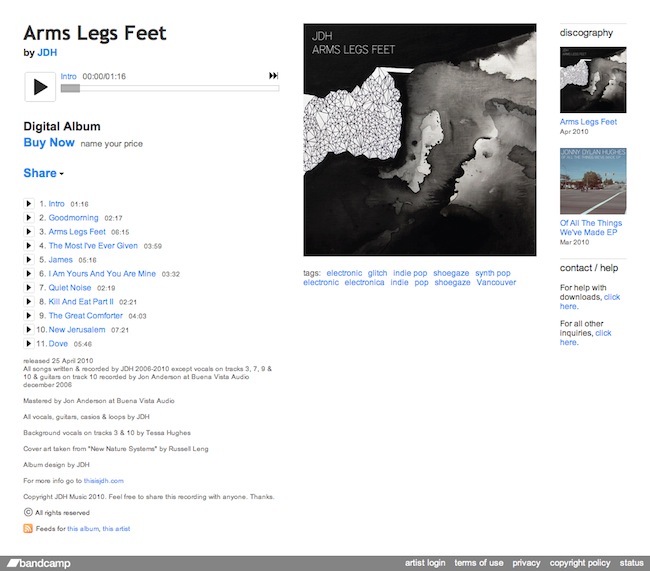 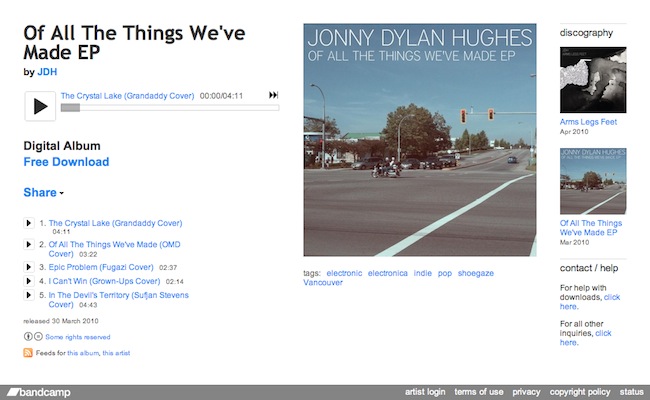 Next up we have some glitchy Casio-flavoured indie pop from Vancover by a chap called JDH aka John Dylan Hughes ... "arms legs feet and "of all the things we've made" are wonderful collections of sonically quirky and lo-fi recordings... that pack a lot of soul and emotional depth.

I love the whole Casio sound... mixed with guitars... its kind of raw and quirky but it really works for me. JDH's cover of the Fugazi song "Epic Problem" on "of all the things we've made" is a very fine and imaginative example of this sound. Lovely. 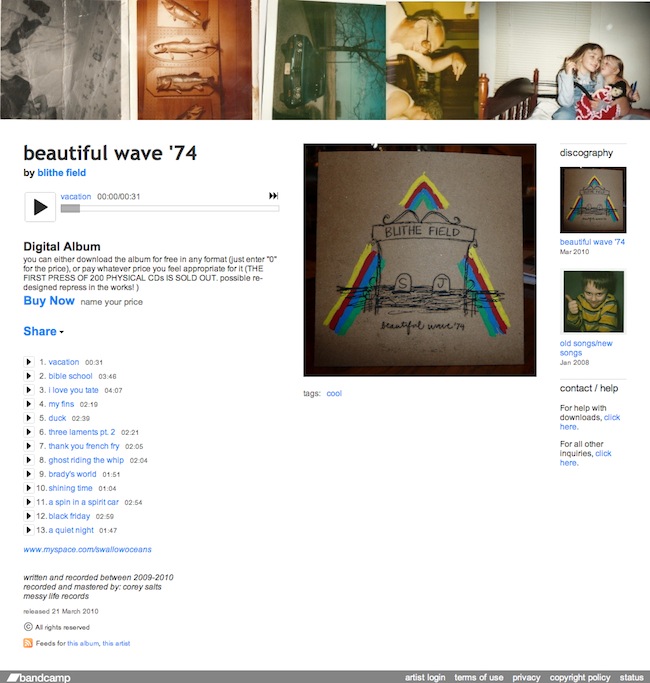 I found out about blithe field via the AT-AT day afternoon video that I posted last night.

The tracks on the album - "beautiful wave '74" - are wonderfully glitchy and quirky... with recorded voices, warm sounds and intriguing sampled loops. Reminiscent of Boards of Canada in places... but not as beat-heavy. Fab. 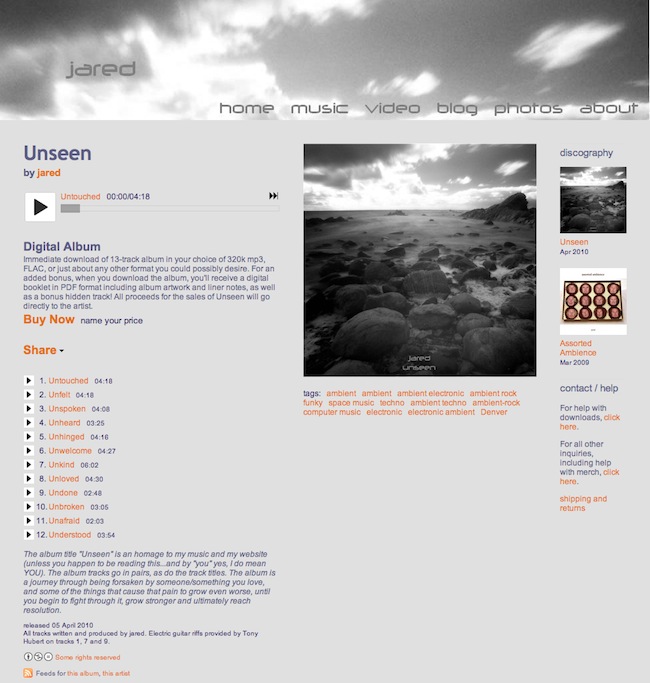 "unseen" by Jared is more experimental than the others featured above... ambient soundscapes with flavours of guitars, progressive electronics and warm synths. There is a theme that underpins this album... as Jared explains:


"The album title "Unseen" is an homage to my music and my website. The album tracks go in pairs, as do the track titles. The album is a journey through being forsaken by someone/something you love, and some of the things that cause that pain to grow even worse, until you begin to fight through it, grow stronger and ultimately reach resolution.

The theme is evident... with the album moving through darkness into light. I like that. Recommended. 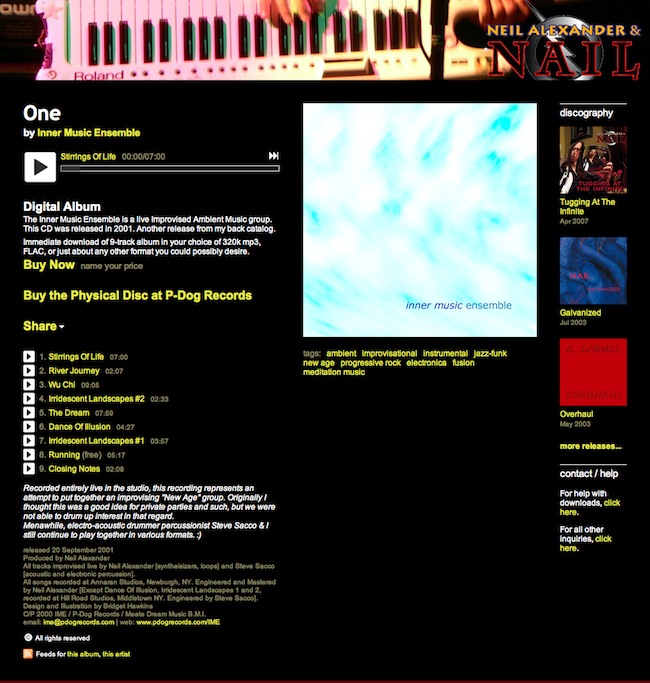 Lastly, we have more ambient soundscapes, this time from the Inner Music Ensemble, an improvised ambient music group that create music that feels like a progressive, non-orchestral soundtrack.

I found this album engaging and immersive... a salve to an overactive mind. It does feel more like a soundtrack but one that I have recontextualised to fit my life as a result of not seeing the film. The instruments used on this album have a wonderful "world" vibe about them... driven by the percussion, in particular, with its crashing symbols and congos which makes for a warm and inviting soundscape. Truly a wonderful piece of music.

Posted by weareallghosts at 3:03 pm

I'm so happy to see someone else appreciating Shekinah! I'm from Albuquerque and I'm really good friends with those guys. Their music really means a lot to them, and they pour everything they have into it!