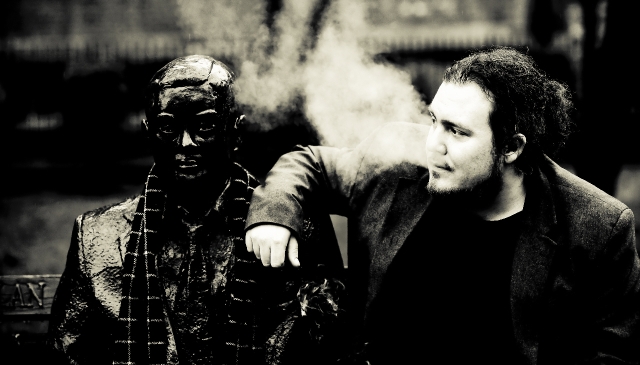 I have a real fondness for Daniel Land's riverrun project. The music on "pentimento" is simply glorious... my kind of ambient... and is on regular rotation on my iPhone/iPod.

Daniel is also the bassist with Engineers whose self-titled debut in 2005 was (and is) a fave of mine... for its interesting crossing of psychedelic rock and electronica (psychedeltronica, anyone?). I now need to check out their other two albums... as Daniel didn't feature on their debut. I have a feeling, however, that they will be on a parr with original, especially considering the awesome electronic artist Ulrich Schnauss is now part of the band too.

What's more... Daniel leads up another band :: Daniel Land and the Modern Painters :: whose version of love lies bleeding is just exquisite. Go here to hear it and other tracks.

I caught up with Daniel... and asked him my seven questions:

My name is Daniel Land and I'm the singer of the band Daniel Land and The Modern Painters. Recently I've also been working with the band Engineers, and releasing ambient records under the name riverrun.

After the Daniel Land and The Modern Painters album came out in late 2009, much of 2010 was spent working with Engineers and helping out with Jayn Hanna's band The Steals. Just recently we've started working on the second Modern Painters album, which is the focus for 2011, and should be released later in the year.

Peter Gabriel. He's always growing and always changing, the very definition of an artist in my eyes.


- Name place that has inspired you.


- Name some "thing" that has inspired you.

I can't speak for any other the guys in the Painters or Engineers, but I'm not sure why I do what I do. I just have to do it. Making music is all I've ever really wanted to do, since I was a child.

I think a lot of things I am involved with musically are very sensitive; the opposite of what you could call "macho" music, really. I've always taken a kind of pride in my sensitivity and in the music I guess I want that to come across; to express ineffable beauty in a way that connotes authenticity and credibility. It's a bit like that idea by The Blue Nile - solace in life doesn’t come from faking it, and music that is genuine and is based upon actual compassion for people is very consoling to the listener. That's all I think about, really.

What we do is almost entirely community, whether it be about the community that buys our records, the community that comes to our gigs and talks to us on Facebook and Twitter, or the gay community that I sometimes sing about in my lyrics. In a smaller sense, bands and their social circles are mini-communities or sub-cultures too.

This year I hope to release a couple more records by my ambient side project riverrun, and do some collaborative work with other people. It really depends how much time I have though; as I've said, 2011 is really about focusing on the Daniel Land and The Modern Painters record and getting that released. It's going to be a big year.