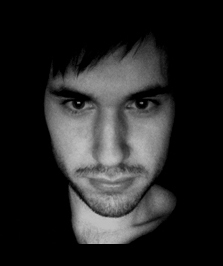 Wolfgang Merx is another friend and inspiration... who records under the moniker of The Hard Drive. He likes my photographs and I have worked with him on the artwork for a few of the releases he's driven... including The Enemy... a single from The Ambient League... which is a grouping Wolfgang explains below and something I am proud to be part of.

I was grateful when Wolfgang submitted his answers to my seven questions...

I'm Wolfgang Merx and I play keyboards and synthesizers. I'm the man behind The Hard Drive, my own music project. Another project I'm involved in is The Ambient League, a group of different musicians who work in small and changing units, similar to the King Crimson ProjeKcts. Then there is The W Team but I don't need to tell you about that one, right, Thomas? But there are even more projects to be revealed soon.

Aside from making music I also write album reviews for the website ThisIsNotAScene.com.

Although I'm still working on songs for The Hard Drive my main focus is on two new projects now, a power trio called Vicious Force and a progressive rock/metal quartet. New songs are coming together slowly but we'll keep on working.

There are a lot of ideas for The Ambient League as well and I guess that the second single will be out in February.

Although I have been inspired by so many different artists there is one man at the top: Peter Gabriel. His music and his words inspire me every single time I listen to them. But I have to mention Neil Young and Robert Fripp as well as they are very important to me and my music, too. Neil Young’s special kind of songwriting has influenced me a lot and it’s the same with his lyrics. And Robert Fripp – I think that you can’t escape his influence after hearing his music.


- Name place that has inspired you.

Although I’m living on the countryside with almost endless farmland all around, forests and mountains inspire me most, as well as icy landscapes. These atmospheres are stunning.


- Name some "thing" that has inspired you.

The sounds of my Moog synthesizer impress and inspire me very often. One certain sound can lead to a whole new song.

I’m playing keyboards for some years now but I’ve started to record the things I play in 2009. I often play to leave the everyday life and its problems behind. The music is almost like a therapy then. One day I was thinking that there is more behind these improvisations, so I recorded them and worked them out. After releasing them on the internet some people told me that they like my music. This is satisfying for a “personal musician” like me – actually my music wasn’t even meant to be released at all, it just was there. But it became even more important to me because I’ve met so many fantastic people through the music. I can say that it changed my life.

Emotions are what music is all about and it’s the same with what I’m doing.

Community has become one of the key elements of my music. The projects would be impossible without other people. Even The Hard Drive – which is a solo project – is influenced by others. Sometimes you simply need advice.

As I mentioned before the power trio and the quartet are on the agenda now. The Ambient League is an ongoing process with many different people and actually can’t be planned although there is plenty of material available to work with. And The Hard Drive… nothing is planned there, too.