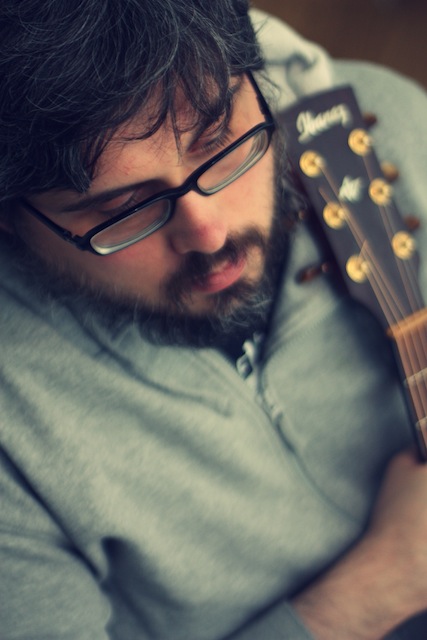 Matt Stevens is a chap who inspires me. He consistently makes great music and he builds community through the tireless work he does on spaces like Twitter and through the webcast concerts he facilitates on the CafeNoodle site - if anyone deserves the title of Social Media *expert* then he does... albeit he is too modest to call himself that. His inclusivity is a breath of fresh air and his approach to music gives me hope for the future. It was him, afterall, who introduced me to bandcamp.

My name is Matt Stevens - I'm a musician and I use a sampler and a guitar to make music and I also play in a band called the Fierce And The Dead and I do bits and bobs of social media "stuff".


2) What are you working on at the moment?
I'm working on my 3rd solo album will be out later this year or early 2012. I'm also getting the debut album by the band I play in ready called The Fierce And The Dead. The band stuff is kind of epic guitar soundtrack stuff and my solo album seems to be more instrumental rock but I'm not sure yet. I just played on a track on Jessica Grace's new album with Seb Roachford from Polar Bear and Kev who produced my solo stuff, I don't think I'm a very good "session player" thou. I only really do my sound. I also played on the Yonks stuff with Lextrical. Blimey.

An artist that inspires me - Bob Mould - From Husker Du to Solo to Sugar - brilliant songwriter!

The place that inspires me is Rushden where I grew up - most of my music is a soundtrack to that place. Spencer Park which is a song off that album is a place there and a song on Relic is called Rushden Fair. Its actually quite grim but it all seeps into your head.

A thing that inspires me is Twitter - i use it to talk to and get feedback from my audience. It keeps you sane when you're a solo person!

I suppose I want to hear new sounds. Its like that thing in Doctor Who with the Master and he says he can hear the drumming. Thats what its like - the music is in my head and i need to get it out! I don't know how it gets in there thou. Its almost like I have no choice. I think coming from a place like Rushden drives you as well because its very much a case being pushed to follow what everyone else is doing and I didn't want to do that, I wanted to do something creative.

Honest and Integrity. Music thats real and done because of the love of creating it. When I'm recording I can't wait to hear the finished product, then once i've heard it i want to move off somewhere else.

Community is essential to me because my stuff is part of an ongoing conversation between myself and the audience. I feel incredibly lucky to have that audience. I never really expected that but I'm really happy people have discovered the music. I've made some great friends, the reception for the last album I did was amazing, far beyond anything I expected.

Its all about the next records, my one and the Fierce And the Dead One. The solo one is the final part of the looped guitar trilogy so that will be the end of that probably. I'd like to work with other musicians to play the music on my solo stuff live, I'm hopefully doing more solo gigs later in the year. More of the Ustream streaming gigs via Cafe Noodle, I want to really look after that community. I'd like to do a video recording and live album at some point as well to round off the "acoustic guitar and loop pedal" gigs and albums. I don't want people to get bored or get bored myself. Its important to keep things fresh. I have some other ideas as well that may happen.

If I get time I'll do more with Yonks which a collaboration with my friend Lextrical who does electronic stuff. I'm writing more posts for www.liveunsigned.com about musicians building a following. Trying to give people honest, useful information. There will hopefully be some Fierce And The Dead gigs as well and I'd like to do something collaborative with the friends I've met online. We shall see.