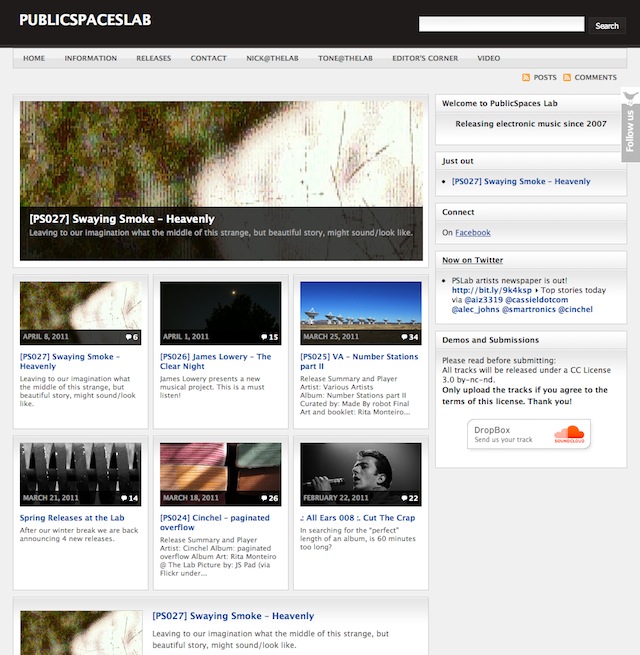 I am a huge fan of netlabels. I find the general ethos of sharing almost as inspiring as the content I find on them. So much so... I'd love to start a netlabel... but don't have any music to go on it.

When I talk about music... I usually get onto the subject of netlabels and rhyme off my faves: Sutemos (active), Earth Monkey Productions (gone but archived), Aerotone (gone but promising to return), BFW Recordings (active) and Rec72 (active) ... to name but a few.

I am now delighted to add PublicSpaces Lab to this list... a netlabel based in Barcelona, Spain; that, according to the release pages, prides itself in releasing high quality electronica from all corners of the globe... and some alien music as well.

I found the label when searching for content from abstract instrumental hip hop producer Dustmotes ... we'd been friends for a while on Twitter and I felt it amiss that I hadn't taken time to check out his music. I found two of his albums on PublicSpaces Lab ... and so much more!

I also found a number of releases by another Twitter friend of mine... ambient soundscape architect Swaying Smoke ... as well as a wonderful compilation of music entitled 'number stations part II'.

I have been happily engaged for the last week in the careful consumption of this music... but wanted to draw your attention to the label, the content they share and their inspired approach to what they do (read this article about taking 'free' out of the discussion on netlabelism and replacing it with 'sharing').

I probably go on too much about bandcamp... to the detriment of other distribution options... but when netlabels are as consistent as PublicSpaces Lab... parity may well return.

Makes me want to start one myself.

Posted by weareallghosts at 9:45 pm

Hi! Thank you so much for your post it means a lot! We are on the process of redesigning the website and to put out some new releases. We were never about quantity but about quality.

If you want to join our team you are also very welcome!