The future will not be fully digital... sometimes we need to touch things. 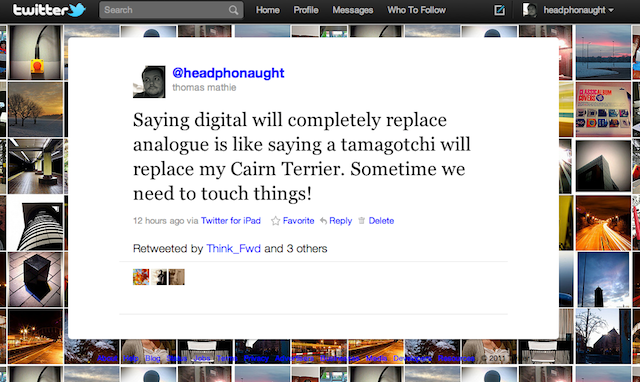 I had this thought earlier today... as I lay in bed and clapped my Cairn Terrier 'Pippin'. I had my iPhone, iPad and Kindle in beside me and I was grazing whilst listening to the sounds of 'Venon Apers' and 'Rhian Sheehan'.

There are things that can't be digitised - my Cairn Terrier is one such 'thing'.

Later on I received in the post two 'Hope and Social' CDs. I have downloaded the albums ('April' and 'Sleep Sound') but it's nice to have the CDs too... for the car and for the hi-fi. The packaging of the CDs is lovely... card rather than plastic... cut out, delicate, innovative and interesting.

Digital... by it's very nature... has no substance. Humans are tactile people... we respond to substance.

Not everything needs to have substance, however. A book I'll read only once... or an album that I 'kind of' like the sound of... I don't need physical copies of them... but the important stuff... the stuff I will refer back to again and again... it makes sense to have my own physical copy.

I don't want a digital dog... I want a real dog that smells when wet and smells when dry and... mostly... smells after meals. The same goes for the important and treasured media in my life.

Digital will only go so far... and where it stops artefacts will continue. We are in a period of transition... where the parity is being redressed. The future will not be fully digital... sometimes we need to touch things.

Tx
Posted by weareallghosts at 11:07 pm

Email ThisBlogThis!Share to TwitterShare to FacebookShare to Pinterest
Labels: ideas

Yes, I agree. A couple of the things I really treasure are my Mother's Bible and and a book on the Tabernacle which was my grandfather's. Neither is of great monetary value but I like to touch them and use the latter as a reliable source book. Anyway, I really love to handle the books I truly value.

And there certainly is no substitute for a smelly dog, especially one placed strategically on the back of the couch!