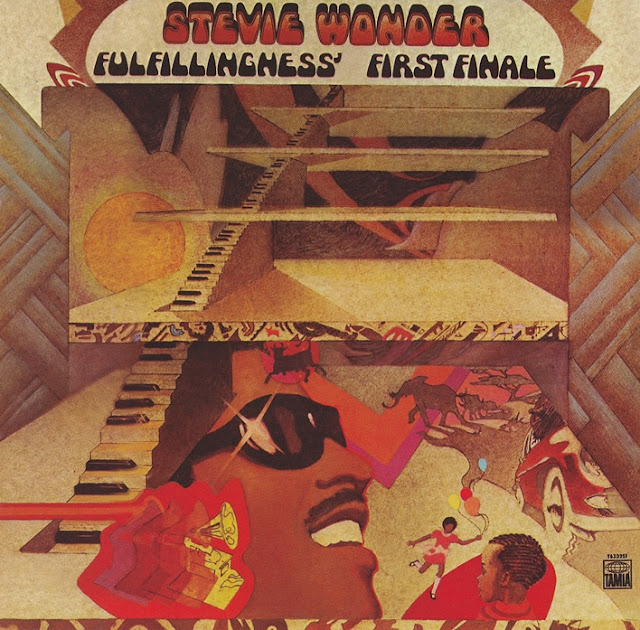 I love Stevie Wonder ... or, more specifically, I love his uber-productive period between 1972 and 1976 where he released 4 albums and 1 extra-special double album. The music from that period is both timeless and wonderfully experimental ... it still feels fresh when I hear it nearly forty years later.

"Fulfillingness' First Finale" is the fourth album in that run ... recorded in 1974 ... which is, coincidentally, the year I was born. In many ways its the low-key poor cousin compared with classics such as "Talking Book" or "Innervisions" ... and is also overshadowed by the awesomeness that is "Songs in the Key of Life" ... the double album that came 2 years later.

But there is something about this album that resonates with me. The mix of songs and sounds ... from funky synth sing-a-longs to bittersweet ballads with the most exquisite guitars ...  is simply first class.

"Boogie on Reggae Woman" is simply infectious ... whereas the downtempo nature of "creepin'" is wonderfully sensuous.

I also love the cameo from the Jackson 5 in "you haven't done nothin'" ... it is a simple doo-wop delight.

To me ... this is a great album that stands tall with Wonder's other great albums ... one that is highly recommended ... albeit one that can't be purchased on it's own but bought with the other 4 albums of the period. Seriously ... if you don't own these albums then reward your ears ... now.

Tx
Posted by weareallghosts at 12:23 pm