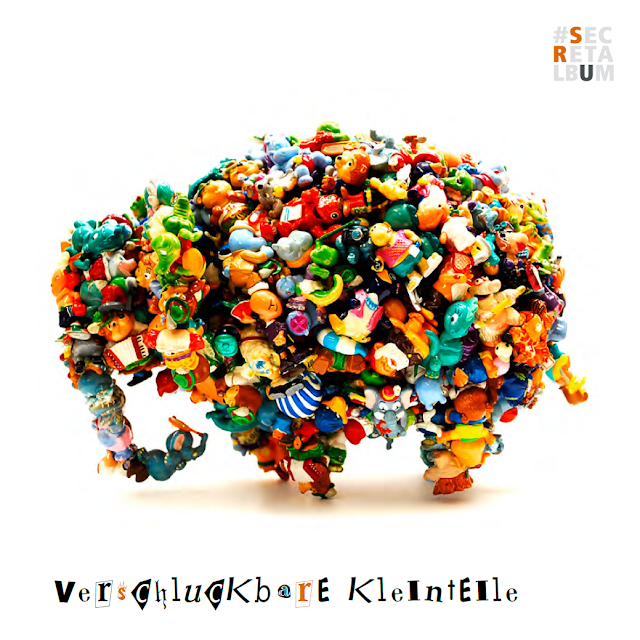 I consider myself very fortunate to be given early access to some amazing pieces of music. One such piece of music is “Verschluckbare Kleintelle” by Rainer Straschill. I’ve been lucky to have been included in Straschill’s creative process as he created what he dubbed “#secretalbum”.

The imagination that has been poured into this album is easy to see ... this is an album of variety ... where a large assortment of sounds ... from a number of talented contributors ... have been used to create something very special indeed: the use of a squeaky door, for example, in “bottom freezer” being one of the more leftfield sounds in use ... others being a church organ, bass, trombone, synths, and even distorted guitar. The use of such varied sounds give the release the feel of a soundtrack rather than an album ... each track designed to express an emotion or articulate a specific scene in some unknown narrative.

It is, in fact, this sense of purpose that really amazes me ... with each of the 16 separate tracks having its own sense of being. The fun for me as the listener is to imagine what these purposes are: the frantic nature of “shalom sister” sounds like the best chase sequence ever ... whereas the spookiness of “ursus maritimus” hints at being the background to a moment in the dark.

The ska of “wehgetan” is fascinating to me and definitely the stand-out track ... especially when you consider this is the only non-instrumental track on the release. It has a real heading-nodding dance-about-in-your-living-room-like-a-loon feel to it. It does, however, finish too soon.

I guess this is my main criticism of this release. It is way too short ... with the 16 separate tracks sitting just under 15 minutes in elapsed time. It is a criticism Straschill has sought, in part, to address by providing a 17th track that compiles the other tracks together into one continuous long-form track ... something I am grateful for.

Let my explain why this is a criticism ... the tracks are just so good! I am left wanting on 16 separate occasions ... I want more from each and every idea presented!

It's like trying to have a full meal on the samples given out at the local supermarket ... you can and do get a good taste but there isn't anything more to sustain you ... nothing other than to press repeat and let the album circulate in your psyche ... something I have done and would recommend. It is only when you approach this album like a salad ... viewing it as a whole made up of smaller elements ... then you will begin to understand it.

But then ... it's not like Straschill is charging full price for this release ... he’s not. He is charging “based upon the planck lengh“ which is very generous indeed, in my view.

For me ... with any criticism of duration set aside ... this is a remarkably creative release and my kudos to Straschill and the myriad of contributors for making it happen.

As a mark of respect and a demonstration of how taken I am with it ... I intend to convert some of the tracks ... especially “shalom sister” ... to ringtones for my iPhone5. I doubt this is what was intended but I will be proud to have Straschill’s ideas representing me.

I have embedded the release’s player below ... have a listen and support independent music:

Posted by weareallghosts at 7:05 pm

thanks for that insightful review. What I like about this review (and most of your reviews in general for that matter) is that you do not work in the usual "the album is of style xyz, and if you happen to like artists abc and def, you'll most probably like this as well" - your approach is more of the "how does it feel" approach - and I like that.

The concept that all tracks are very short (more specifically: not longer than 90 seconds) is in fact the main defining concept of the #secretalbum project - and as such I'm willing to accept that you (or others) do not always like it that way, but I will not defend my artistic choice here.

As for using the tracks as ringtones: one of the titles (The Usual Bavarian Approach to Electronics) had in an earlier version been my main ringtone for many years (and its working title was "Klingelton" (German for "ringtone").

I will proudly feature these tracks on my iPhone and intend to feature them on upcoming circumambient podcasts.