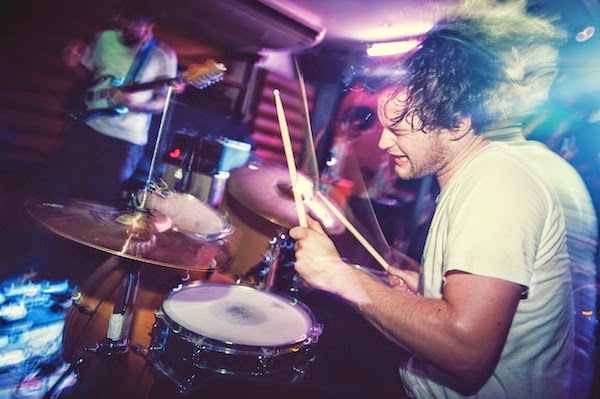 Every-so-often someone finds the ol' nanolog by accident, they dig what I'm about and ask me to check out their music ... and every-so-often their music clicks with me and I want to know more.

Case in point is Glaswegian two-piece rock outfit "Cutty's Gym". The girlfriend of Craig McIntyre (the guitarist in the band) found the blog using the following terms - blog, glasgow, southside & Tycho - and liked what she saw ... and told McIntyre.

McIntyre got in touch ... I checked out their music and really, really liked what I heard. I do have a soft spot for The Black Keys and other two-piece outfits (White Stripes, anyone?) ... I dig the energy and immediacy of this style of music ... it acts as ginger to cleanse my palate from all the tasty ambient and post-rock soundscapes I consume on a daily basis.

McIntyre came over as a sound bloke so I asked if he'd be interested in telling me a wee bit more about what drives his creative expression ... he responded almost immediately and then was very quick in responding with the following:

1) Who are you and what do you do?
I am Craig McIntyre I'm 24 from Glasgow, Scotland and I play guitar in the two-piece "rock" band Cutty's Gym. This band is now one year old, and we recently released our debut EP Sick Glass on Bloc+Music. I would describe the music as experimental, dancey, rock.


2) What are you working on at the moment?
Having completed the writing of the EP some months ago we have begun writing our first album, its a relatively slow process as we always like to try new approaches to writing music. The band was started based on improvisation, and the first few shows were exclusively improvised. Now that has evolved into a way of improvising upon basic structures of songs that we write and record one particular way, but can play in all sorts of different ways live.

I am continually inspired by music I hear, artists I see, or read about. Sometimes just by the approach an artist has taken more than the end result. I alway searching for something just a little different, more recently for me I have been listening to a lot of jazz, and some blues and folk. One artist in particular would be Charlie Parker the saxophonist, who was entirely influenced by everything that came before but using it and playing it in his own way.

I wouldn't necessarily say there is a Scottish influence on the way our music sounds, but growing up and living in Scotland has definitely influenced the two of us, and always seeps into the more of the feeling behind the music.


4) What drives you to do what you do?
I just get a lot of pleasure and satisfaction out of writing and performing music, and have always ensured I can do this as much as physically possible.


5) What values do you wish your creativity to express?
Our music has a lot to do with the live performance as well as the recording, and with the live show we are always hoping people can engage with the show and it's all about a good fun time. As daft as that might sound a lot of what I did in the past was driven by a lot of negativity surrounding the music or ethos of the band, this got very tiring and I wanted to make my new band have a more positive effect.


6) What role does community play in what you do?
Glasgow as a community of musicians is very important. I have toured quite extensively in England and throughout Europe and I always feel when I return home that Glasgow has something special. Being so small, but teeming with creativity it is hard not to be affected by that and it encourages you to involve yourself in that community.


7) What is next for what you do?
We have been to France and Belgium a couple of times now in the past year so we intend to continue playing around Scotland and England more this year and finish writing the album. Once written we will try and see if there is anyone interested in working with us to release it.

My thanks to McIntyre for his response ... and to his girlfriend (whose name I don't know) for pointing him over here. It is appreciated.

Have a listen to Cutty's Gym's EP ... and, if you like what you hear, do your bit to support independent music:

Posted by weareallghosts at 10:10 am