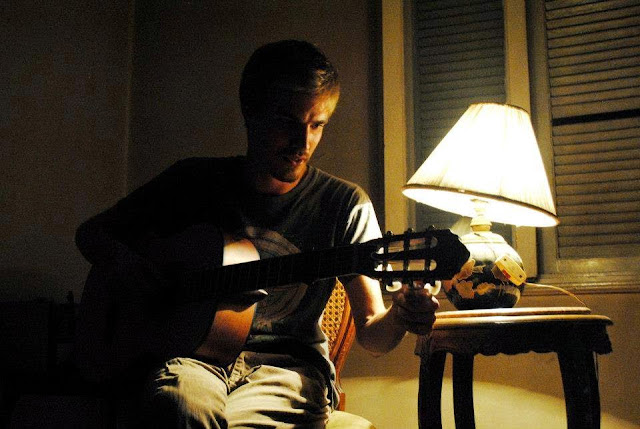 I am currently off my work with a bronchial infection ... I have lowered immunity as a result of my whooping cough and now have an infection that has narrowed my airways and gives me asthma-like symptoms. As such, I've been told to rest by my Doctor and my boss at work. Whilst I am able to read, listen to music and watch films, I've not been able to write. It is, therefore, brilliant that a number of willing creatives have been able to fill the gab by doing the majority of the writing for me.

Case in point is a lovely chap called Gowaart who creates some remarkably beautiful neo-classical soundscapes under the name of Yadayn that centre on his finger-picking approach to playing acoustic guitar. Whilst this technique isn't unique ... I'm thinking John Williams, for example ... his use of it in combination with neo-classical sounds is. At least I think it is. I've been rather taken with his current EP - "Vloed" - which was formed, as the liner notes state...


"...out of the bulk of material written in the last few years five longform compositions for guitars were selected, flooded with notes, littered with arpeggio’s and sparsely populated by meaningful silences."

I really, really liked what I heard ... so, when talking with Gowaart, I am delighted to say he agreed ... this is what he had to say:

1) Who are you and what do you do?
I am Gowaart, a Belgian guitarist active in a few projects but at the moment predominantly in Yadayn, a solo project completely focused on my guitar playing. The name yadayn means "two hands" in Arabic, and pins down the basic idea of what I try to do: bring music by just using my two hands and a guitar.


2) What are you working on at the moment?
The cool little label Navalorama Records just released my debut album "Vloed", so most of my energy goes into promoting it at the moment. I'm trying to play live as much as possible. At the same time I'm always working on new material, some of it in the same vein as the music on the first album, some of it going in somewhat different directions. I've been working out a few longer songs in which loops play a much larger role and I have a few songs with vocals laying around which I'd like to finish, but I have a very mediocre singing voice so I have to find a way around that (interested singers may contact me any time by the way).


3) Who inspires you?
- Name an artist who has inspired you.
Probably the largest influence on my music has been my father, who is a professional classical guitarist, although he has been playing different, semi-improvised spiritual music for the last decade or so which I find less inspiring. I grew up with his music and the classical music he used to play in the background, so every time I hear one of his old pieces or a piece by, say, Tarrega or Villa-Lobos it immediately brings up childhood memories. It's probably not surprising then that plenty echoes of this music can be found in my own compositions. Other musicians have inspired me too of course. Notable guitarists which I admire are James Blackshaw, Sandy Bull, Robbie Basho and Mark Kozelek. Some composers and bands I find inspiring are John Zorn, Maurice Ravel, Silver Mt. Zion, Do Make Say Think, Grails, Balmorhea and a host of others.

- Name a place that has inspired you.
The bulk of the material on "Vloed" was written while I lived in Ghent as a student, especially when I shared an appartment with my girlfriend for two years. I now live back with my parents in a sleepy town close to Brussels, so in some way the album for me is nostalgia for my student life in Ghent. Another city that has greatly inspired me and seeps through in the music is the overwhelming metropolis Cairo where I also studied for a few months.


- Name some "thing" that has inspired you.
When I was on holiday a few years back in Firenze, I stumbled into an old monastery church outside of the city centre. By pure coincidence the monks were having a gregorian service. This was in a sort of crypt where the acoustics were truly remarkable and the sound of their voices completely enveloped me. Although I'm not a religious person anymore, this made a profound musical impression on me. In some ways I try to do the same with my music, pull the listener into a completely overwhelming world of sound.


4) What drives you to do what you do?
I don't really have a romantic idea about the creation of music. What drives me is purely the fact that I have fun in constructing songs and sharing them with people. I guess I'm out for some sort of recognition too, I love getting great comments about my music. So I guess there is some creative surge, but this is not per se linked to my mood at the moment. It's more of a coincidental thing.


5) What values do you wish your creativity to express?
I find this a very difficult question. Instrumental music should not be open about values I think, it should be a vessel for the listener himself who can fill in his own thoughts and feelings.


6) What role does community play in what you do?
The town I live in now has pretty much no music scene to speak of, and I also never really felt part of a music scene in Ghent. Maybe that's why I'm playing solo! I do have a band called Zura Zaj as well though, and I'm really happy about it, although we tend to go extremely slow in developing song material. My family is an important support too. My mother has even sold quite a few CD's for me!


7) What is next for what you do?
As I said I'm promoting this album I have now, trying to play live as much as possible and in the meanwhile I slowly work on new material. Possibly there'll be a new album by mid-2015 on a nice French label that contacted me, but that's still a somewhat vague idea. In September I'll be playing live at the great Incubate Festival in the Netherlands, a gig I'm really looking forward to.

Thank you Gowaart! I really appreciated your honesty ... and well done to your mum too, mothers are the best PR!

Take a listen to "Vloed" below and allow Gowaart's music to embrace you as it has me ... it really is something special: