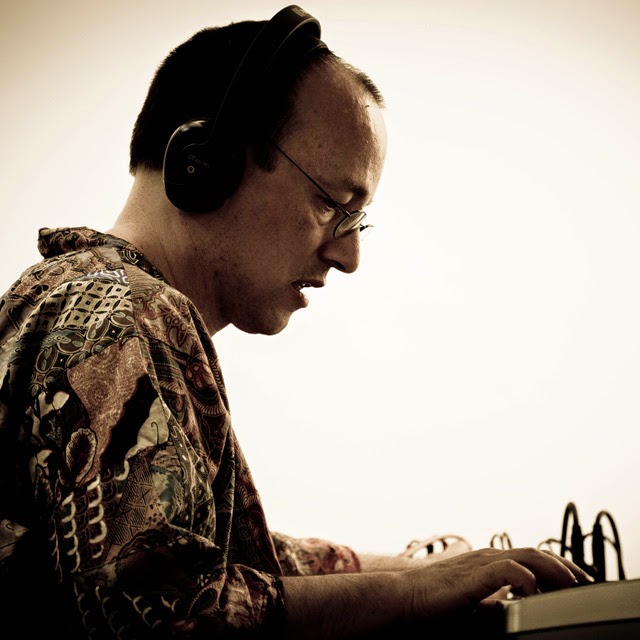 Musician Michael Brückner is an ever-present presence in my Facebook feed. He is a wonderfully upbeat person who creates delightful music. His collaborations with Cousin Silas on his various 'and friends' compilations are extra special and definitely up there with my faves.

I caught up with him recently and asked my wee blog interview ... this is what he had to say:

1) Who are you and what do you do?
As far as I can tell, I’m a male human from Germany, Earth, and at the moment I type this 44 years old. I’m married to a wonderful wife, and we have one daughter (equally wonderful ;-) ).
To earn us a living, I work as a graphical designer and also printer / preprint technician in a small family printing + graphical services company (I have actually studied communication design, aspiring to become an illustrator, especially of children’s books, however it turned out slightly different, so far…).

In my spare time, I produce electronic music.

I started to dabble in this field around 1992, have created quite a few albums in this time, most of which are private releases, more recently some have also appeared on different labels.
I also love to perform live, although so far I only rarely had the opportunity (except for 2013, which had been a surprisingly good year in this respect).

I have produced music in a variety of styles or genres (or maybe better: I have always used elements of many of them), however, I see ambient as the “gravity centre” of my interests, the starting point from which I explore other areas. Since about four or five years I also started to do more “neo Berlin School” (or “retro space”) music.


2) What are you working on at the moment?
Oh, well. Actually I have the habit of working on several projects in parallel, which take shape and are finished at different points of time – and it’s just like that at the moment, too. Most of them are collaborations, something I want to concentrate on in the future, as I have already done so many solo albums that producing more and more seems slightly pointless…

I’d maybe like to highlight three of them: I’m remastering, and partly remixing or even changing my album “Ombra”, originally from 2010, which will be re-released under the title “Ombra – Revisited” as a limited edition of 100 copies as an industrially pressed CD on my good friend Hagen von Bergen’s cozy little label BI-ZA Records. There will also be one or two “bonus items” for this release that have to be created, and we hope to accomplish this within the next two weeks, so there’s a bit of a hurry… ;-)

Then I’ve finally started to work on an album with Rebekkah Hilgraves, who is an American opera singer, poetess, studio owner – and ambient radio show host. For this album, Rebekkah has read a cycle of her poetry, and I will embed her readings in (hopefully adequate) sonic textures…

Finally there is the album with drummer Tommy Betzler. Tommy has been active in the electronic music scene since the early eighties, playing for and touring with Klaus Schulze, for example. We have played two gigs together at small German festivals last year and will do more in the future. This album will be more of an electronic rock album, also with Berlin School leanings. I have also invited several other guest musicians who will hopefully join us, the plan is to finish this around late summer…


3) Who inspires you?
Well – there were, and still are, SO many, aren’t they? If I wrote a very long list, trying to give them all due credit, I still would end up forgetting some.

Maybe I can escape this by saying that all that comes to my attention in life – nature, people, society, art, literature, anything – is a source of inspiration. Obviously the things I enjoy and embrace, but also the things I reject or that frighten me, in that these also trigger a response which might be reflected in what I do, and what I create.

OK, but I guess that in the end, You might still want names ;-) so for the sake of satisfying this interview’s readers’ curiosity, here are some which maybe influenced me slightly more than others:

For view of life in general: different varieties of spiritual believe, including Christianity, Buddhism, Sufism, Hinduism and others; the writings of Erich Fromm (especially “The Art of Loving”) and of Stanislav Grof

A special mention for music journalist Albrecht Piltz, who’s lucid reviews for German Keyboards Magazine were a great trigger for my imagination during many years…

P.S. On re-reading this list I’m kinda shocked that it doesen’t include a single woman (so far) – in spite of the fact that I feel that I have experienced a lot of female inspiration in my life. So here are some wonderful ladies that made a big impression on me and a difference in how I perceive life, art and everything (vaguely following the order of “disciplines” above…):

As I said, the list is anything but complete, then again, by these examples You may perhaps already see a pattern, and can fill the gaps with likely candidates… ;-)


4) What drives you to do what you do?
Well – every time a take a walk out in the desert, I meet this guy who’s saying: “See the landscape? The houses? The cars? The girls? I’ll give You ALL this if You dedicate another album to me…”

Obviously, the chap is a lunatic, because in a desert there are no houses or anything, but usually I do it anyway, because he is limping and I have been told to be nice to handicapped people… ;-)

OK, on a more serious note ... I feel this creative urge ever since I can remember, even as a child I had a habit of often staying all by myself and indulging in some project that required patience and dedication. Music came later (although I early on was interested in sound recording and produced several audio plays as a boy, and hundreds of mix tapes as a teenager), before that, I spent hours on end on drawing/painting or on writing short stories. My talents were noticed by some and I was (moderately) encouraged, so from some point on I sensed something like a “calling” to produce art of some sort in my life, and the echo of that idea, or notion, keeps on driving me, still (although I have to say that I’m not as sure of how good an idea it actually was then I used to be…).


5) What values do you wish your creativity to express?
I’m not entirely sure if it’s the “job” of creativity to express any special values at all, and sometimes I tend to believe that art, essentially, is beyond morality, or at least, that it has the function to tell tales about any aspect of life and any possible experience, may it be good or bad, ugly or beautiful, favourable or repelling, etc.

Then again, it of course has the power to touch people, maybe even change their views, to communicate concepts and to shape our perception of the world, and therefore, there’s also responsibility.

I admit that I tend to oscillate between these two positions. Sometimes I just follow the flow of inspiration, where ever it takes me, even if it should wash some scary forms to the shore…
Then again, I also consciously strive to promote the values that, well: seem valuable to me.

As You may have guessed from my answer to question 3, I am - if not exactly religious - a basically spiritual person, also an ecologist, a late born hippie with short hair. While the destructive tendencies of humankind scare me and make me deeply concerned, I also still believe in humanities inherent potential to wake up to the better part of their nature, and, by doing so, turning the world to a much better place. If, in that process, my music can be helpful in any way, be a stimulus or an inspiration, something that can lift people up when they are down or maybe offer some shelter, or hideaway, when they need a place to rest, that would make me very happy…


6) What role does community play in what you do?
By now, a lot, I guess – however it hasn’t always been like this; I used to be quite a loner and a recluse for the bigger part of my life, and I also started to make music, and develop my skills and ideas (nearly) as an autodidact in the privateness of my room. Actually it wasn’t before 2006, when I was into music already for about 14 years, that I dared to come out of my shell, and enter, with the help of the internet, the circle of friends, colleagues and likeminded people who I meet (for example) on Facebook every day now. So, in a way, much of my development has already happened before; but still – the lively exchange, interaction and inspiration I receive from this community has a huge impact on what I do – and of course also how I am received, since until that point, I nearly had any listeners…

On second thought, a different kind of community actually did play a large role in starting me of at all: until my early twens, I didn’t believe I had the abilities to create music; this changed after I joined a meditative yoga community. The exercises there included the chanting of Indian mantras, and this experience opened a door for me, or was the main trigger, to gather the courage and confidence to give it a try…

Also, I met the classical Cello player Christoph von Erffa there, who was also teacher for improvisation on the Akademie für Tonkunst (Academy of Sound Art) in Darmstadt, and he gave me a good introduction into various aspects of music, including experimental and microtonal music.


7) What is next for what you do?
Let me see: ironing some shirts, doing the dishes, and then, hopefully, go on remastering the remaining tracks of “Ombra” for the new release…

Thanks Michael ... while you are waiting for “Ombra – Revisited” have a wee listen to Michael's recent album "In letter Konsequenz":

Posted by weareallghosts at 1:42 pm