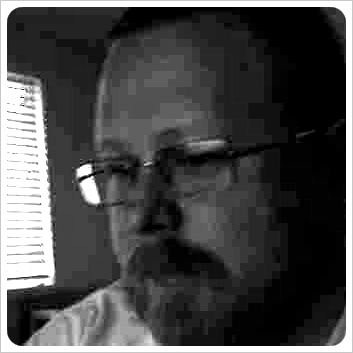 I like Todd Elliott aka Toaster's music. I like the fact we met on Twitter and can interact directly. I see this as being the future for the music industry... the music "cottage" industry.

I caught up with Todd via email and asked him my seven questions:

I'm Todd. I do a lot of things, but I'm mostly answering these questions because of my musical leanings as 'toaster' (toaster.bandcamp.com).

I'm learning how to use the Octatrack, in the hopes of taking some of my tracks outside the studio and to cafes to play in front of indifferent patrons. I'm also slowly working on new patches and sounds which I'll eventually develop into the follow up to "The Banging Process". I also have plans to release a drone/ambient thing, probably under a different name.

I get bored by using the same approach over and over, and so I am always 'working' on learning some new piece of software or devising controllers or something-- this approach is inspirational, but I also need to be able to replicate things if I want to do a performance, so I am assembling things into a more 'live' context.

John Cage. He really redefined what music 'meant' for me, in a great number of ways- he was the first artist I heard of who seemed to hear music the same way I did. I don't make music that's 'Cageian' in any real way, but his approaches and philosophies loom large in a lot of things I do.

Places only inspire me when I have experienced something cool in them. I lived in Edinburgh for a time, and used to MC a singer songwriter night there, for example-- while Edinburgh was an amazing place, it was only amazing to me because there was this circle of people who all gathered around to be creative, who invited me into their homes when I was homesick, and so on.

These days, the chair I sit in in my home studio is as inspiring a place as any, insofar as I do all my musical work there, and most of the 'creative people' I know I know through the internet, so…

Without trying to sound too much like a commercial, Ableton Live has proven to be a great, helpful blank canvas on which to paint my bleeps and bloops. I've used it since version 1, and have strayed only a few times.

I'm fascinated by sound. I'd love for there to be a deep, complex answer to this, but that's all there is to it.

None, really. Or none that I would communicate out-- I figure once I have released something, it's up to the listener to decide what it means to them, and I'd hate to muck it up for them by telling them that I had a different intent when I was recording it. My songs find their meaning in the ears of the listener.

Don't get me wrong; there is lots of 'message' music that I think is great, but it's not what I do.

A slowly increasing one. Originally, I more or less decided to release things so friends and a few others could hear it, and eventually I decided I'd like more people to give it a try; the internet has been a wonderful place to connect with other people who do or like similar things, and it's been nice to slowly discover a group of 'personal musicians' interested in listening as well as creating.

As I mentioned above, I'd like to try playing a show or two. I'll probably dive a little deeper into Plogue Bidule as I work on the 'drone/ambient' thing. But mostly, I plan to keep playing, and see what develops. Not knowing what's next is sometimes a wonderful thing.

Thanks Todd! Please check out his music: http://toaster.bandcamp.com
Posted by weareallghosts at 10:00 am